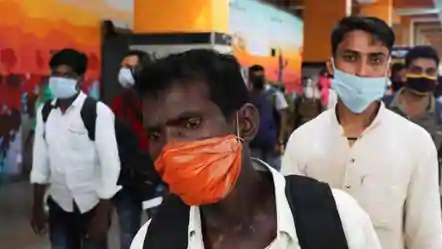 Mumbai : Surgical and N-95 masks can reduce the volume of a coronavirus disease (Covid-19)–laden cough-cloud by seven and 23 times, respectively, according to a recent study conducted by two scientists from the Indian Institute of Technology (IIT) – Bombay.

The study, which was published in a journal by the American Institute of Physics on Tuesday, sets out to estimate the volume of air contaminated by the cough of a Covid-19 patient.

Professors Amit Agrawal and Rajneesh Bharadwaj, who are attached to IIT-Bombay’s department of mechanical engineering, has conducted the study.

The findings have revealed that up to eight seconds after a Covid-19 patient coughs held the key, as suspended exhaled droplets permeate the air, where the level of the viral infection is likely to go up by 23 times.

“The presence of a mask drastically reduces the volume and significantly cuts down the risk of the viral infection for other persons present in a room. Similarly, actions such as coughing into the elbow and the use of a handkerchief can reduce the volume of a cough cloud and, consequently, the chances of dispersion of the virus,” the study stated.

The researchers had set out to analyse the volume, temperature, and relative humidity of the cloud produced by coughing to understand their dispersion in the surrounding air.

They had used a mathematical model to analyse the fluid dynamics and thermodynamics of the cough cloud. They found that the cough cloud lasted between five and 14 seconds following which it would dissipate.

“An N-95 mask not only cuts down the number of droplets exhaled by a Covid-19 patient, but also reduces the amount of infected air produced by the person,” said the researchers.

They exuded confidence that the findings would help understand how SARS-CoV2, which causes Covid-19, spreads in the air.