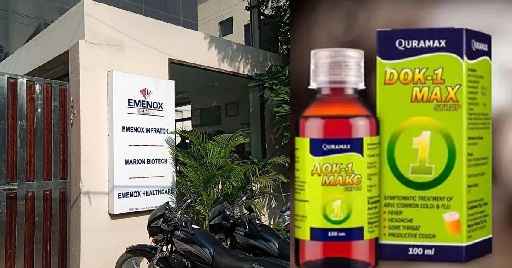 Lucknow : The Uttar Pradesh drugs licensing and controlling authority on Monday suspended the manufacturing licence of Noida based Marion Biotech which is linked to deaths of at least 18 children in Uzbekistan, allegedly from consuming its cough syrup, Dok-1 Max, according to people familiar with the matter.

“The company failed to respond to a show cause notice that was served on the 30th of last month; they were given 7 days to reply but there has been no response from the company so far. Even though the production was already halted , they were served a formal directive on Monday suspending their manufacturing license,” said a senior official in the state’s drugs regulatory division, requesting anonymity.

According to people familiar with the matter, the company was found defaulting on schedule M- good manufacturing practices (GMP) in production, even as results of samples sent for laboratory testing from the company’s manufacturing unit at Noida in Uttar Pradesh are awaited.

“It does not matter if they respond now as we will now be waiting for the lab test results; and as per protocol another show cause notice may be served depending the lab results that they will have to respond to,” added the official cited above.

“Following inspection by the CDSCO team in view of reports of contamination in cough syrup Dok1 Max, all manufacturing activities of Marion Biotech at NOIDA unit have been stopped yesterday night, while further investigation is ongoing,” tweeted Union health minister Mansukh Mandaviya on December 30.

The company’s legal representative earlier said the company stopped manufacturing of the syrup— Dok-1 Max— on its own accord.

Mandaviya said then that appropriate action would be taken based on the inspection of the pharma company. The inspection lasted a couple of days starting December 27.

The State Security Service of the Central Asian nation announced that it has started a criminal probe in the matter, reported the SSS press service on December 27.

The same chemical ethylene glycol, which is a common contaminant in pharma products made without adequate safeguards, was found in cough syrups made by Maiden Pharma that were allegedly behind the death of 70 children in The Gambia, although the Indian government said samples it tested were safe. The investigation into that matter is ongoing.

Marion Biotech is a licensed manufacturer and holds the licence for manufacturing Dok-1 Max syrup and tablet for exports . The company does not sell the product in India.

The health ministry in a statement said that samples of the cough syrup were sent to the Regional Drugs Testing Laboratory (RDTL) in Chandigarh for testing.

The ministry also said that the Indian drugs regulator, Central Drugs Standard Control Organisation (CDSCO), has been in contact with the national drugs regulator of Uzbekistan regarding the matter since December 27.

The Ministry of External Affairs (MEA) also issued a statement saying that India was in touch with the authorities in Uzbekistan and has sought details of their investigation into the matter.