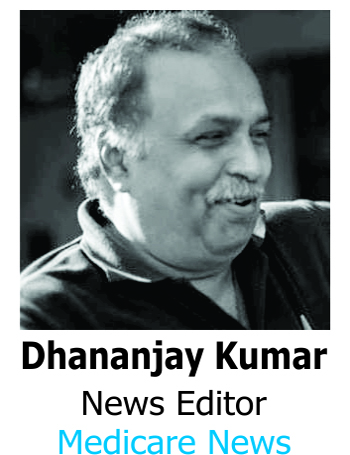 New Delhi : As Vitamin D deficiency has been found going way beyond impacting bone mass, most of Delhi diseases may have its footprint. It is now advised that while treating any disease, vitamin D assessment must include the test repertoire prescribed by the doctor. According to doctors, addressing Vitamin D deficiency may magically improve the treatment outcome. Delhi’s huge populace, upward of 85 percent, are starved of this sunshine vitamin.

Delhi-NCR is facing a Vitamin D famine in Delhi in the midst of plenty. Sun being the biggest provider of Vitamin D, Delhi people should have problem of plenty because its overdose also has its downsides. But despite it having sun shining for more than 12 hours a day and hence a veritable Vitamin D downpour from the sky, Delhites are severely of it. Dr. Ashish Choudhary, a well known Orthopaedic (bone doctor) and Managing Director, Aakash Healthcare, recommends a revolution of sorts like that of iodine fortification of salt. Delhites urgently needs to be supplemented and fortified with this Vitamin via routes other than sun rays.
Dr. Ashish choudhary says- Over 85% of Delhiites have been found suffering from Vitamin D deficiency. Vitamin D, essential for strong bones, helps the body use calcium from the diet for enriching bone mass. Symptoms of bone and joint pain and muscle weakness largely point to condition of vitamin D deficiency. I see a number of people of all ages coming with complaints of these symptoms. I have invariably found them victim of Vitamin D deficiency. Vitamin D deficiency can lead to lowering of bone density and frequent fracture incidents and sometimes rickets in children. Vitamin D deficiency is a major crisis in Delhi and other metros.
Dr. Choudhary further says- ‘Of course Vitamin D is vital for bone health but its deficiency is no more confined to impacting bone health alone. Till not long ago, we only knew that Vitamin D is a mere carrier of calcium we consume through food to the bone, so is crucial for bone health. But new researches have underlined that Vitamin D deficiency play a role in a number of ailments, namely, high blood pressure, cancer, heart disease, osteoporosis, obesity, diabetes, multiple sclerosis, infertility, depression and what not. Meaning thereby Vitamin D is necessary for not only bone but for overall health. It is vital for everyone to ensure that the body works well, is able to fight illness and heal well.
So, according to Dr. Choudhary, addressing vitamin D deficiency may lead to better outcomes in the treatment of a number of diseases. Vitamin catastrophe is a major health issue. So, life style changes that lead to remaining indoors away from sun cause this deficiency. Add to it, the melanin covering on people in Indian subcontinent preventing absorption of this vital vitamin from sun rays. Nothing less than campaign like fortification of salt by iodine is called for to address this problem. Mere soaking in sun rays would not be enough. Other ways would have to be resorted to, to compensate for the deficit.
Dr. Choudhary adds: A stray case of death of a boy by a quake’s overdose of Vitamin D supplement should not make us lose sight of the urgent need of addressing Vitamin D deficiency. Modern doctors know what dose a particular person needs.