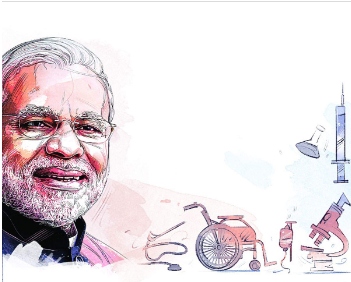 A day after launch of the Pradhan Mantri Jan Arogya Yojana Abhiyan (PMJAY), Shiv Mangal and family of Ghasiyaripura line up to get ‘gold cards’ in a small room allotted for the scheme in Bahraich district hospital. Ayushman Bharat hoardings have drawn them in. ‘Arogya Mitra’ Gautam Mishra checks their Aadhaar and ration cards, takes biometrics and lo, the gold cards are printed out in about 20 minutes!

At two government hospitals in Gaya district of neighbouring Bihar, inquisitive patients trickling in are not so lucky, as the equipment to generate the cards is still to arrive.

In fact, a gold card, entry point to the scheme that assures free cashless medical cover of Rs 5 lakh for a family, is a distant wish for many, as ET found in Bahraich and Gaya, two backward and ‘aspirational’ districts identified by NITI Aayog.

About 54,000 gold cards have been handed out as on date under the scheme that targets 50 crore people. But in Uttar Pradesh, till date, only 5,686 beneficiaries have got them while in Bihar, the number stands at a mere 1,592 persons. The states have close to 6 crore beneficiaries each – the largest in India.

Ayushman Bharat chief executive Indu Bhushan admits to issues in both states, along with Madhya Pradesh. “We’re focusing on these three large states because they didn’t have any scheme in the past.

I’m confident that in a month, they will have this (scheme) up and running,” he told ET. 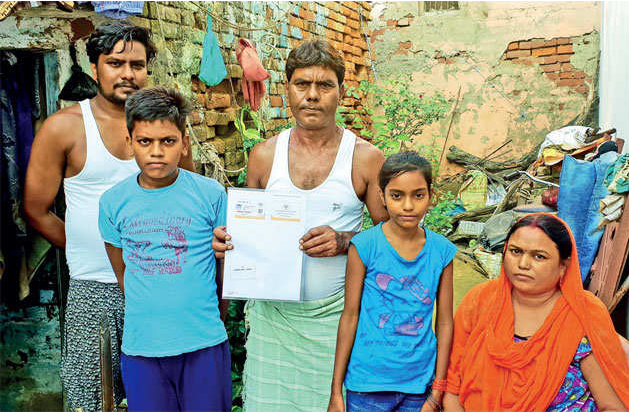 What the Doctor orders: Ground report on Ayushman Bharat from Uttar Pradesh and Bihar Bhushan says he has dispatched a team of six officials to stay in Bihar and push a better performance. He himself is on a visit there at present, as the government deals with the teething problems associated with the ambitious programme — the world’s largest sponsored healthcare insurance scheme that aims to provide 10 crore of India’s poorest families with health insurance of `5 lakh each per year for secondary and tertiary care hospitalisation. 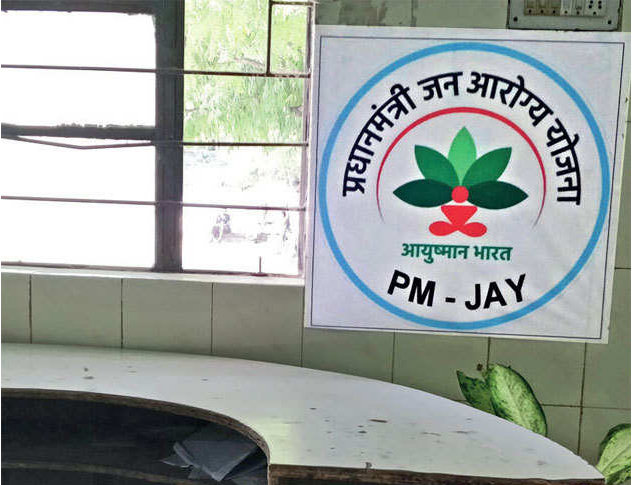 What the Doctor orders: Ground report on Ayushman Bharat from Uttar Pradesh and Bihar
“That’s the silver card. This is when beneficiaries know they are part of the scheme. Gold card, which is actually the gold record, is when the system knows that you are part of the scheme, when we’ve seen your name in the Socio Economic Caste Census and done bio-authorisation to confirm you are the same person,” he explains.

Once you have that gold card, he adds, a beneficiary can go to any empanelled facility for treatment.

Bhushan also confirms that Aadhaar will now be needed to get a gold card, after the recent Supreme Court judgement on the unique ID. 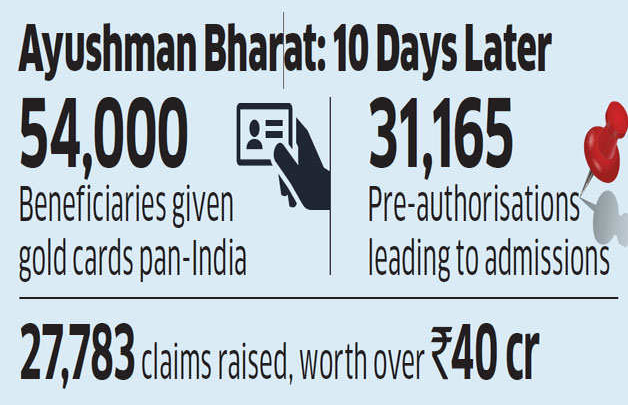 Ground zero: Bahraich
In the hinterland of the northern plains, the gold card is proving elusive. Bahraich, for instance, sees people being forced to travel to the district hospital, the sole gold card dispersal centre in the absence of the facility at common service centres (CSCs) in rural areas. The hospital was also supposed to have two Arogya Mitras but one was on leave a day after the launch. 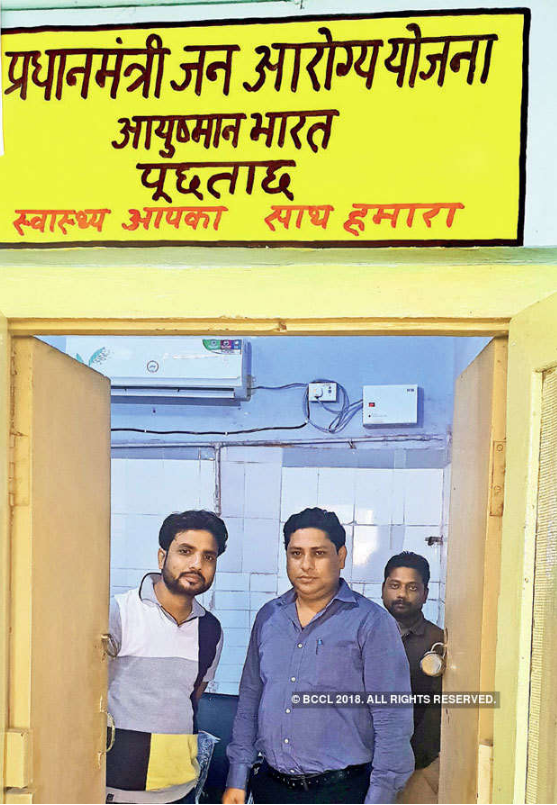 What the Doctor orders: Ground report on Ayushman Bharat from Uttar Pradesh and Bihar
Personnel are thin on ground. “We still have to go set up the equipment elsewhere,” says staff of the implementation support agency.

In Bahraich, 54 gold cards had been handed out till October 1.

Ground zero: Gaya
ET found the kiosk supposedly set aside for generating gold cards at Gaya’s Jai Prakash Narayan Hospital unattended. “Services will take some time to start because we are still waiting for equipment such as webcam and thumb impression scanner. We haven’t even got the IDs for Arogya Mitras,” a staff member admits. “Two or three patients came forward but we have asked them to come back with ID proof,” says another staffer.

It was a similar situation at Anugrah Narayan Magadh Memorial Medical College and Hospital, though an Arogya Mitra was present in a cramped and dimly-lit room. 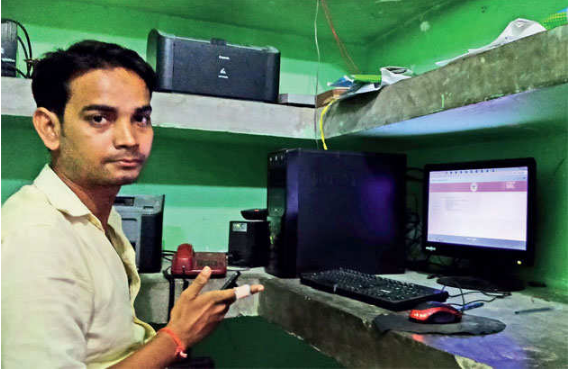 The process of pre-authorising treatment for admitting patients under the scheme starts after one gets a gold card. The result? Just 31 patients admitted in Uttar Pradesh and one in Bihar in 6 days till last Friday.

“Uttar Pradesh, Bihar and Madhya Pradesh should be giving us more numbers (of pre-authorisations) — about 10,000 altogether daily. Right now, they’re giving about 20,” says Bhushan. He also wants hospitals to move to the next stage. “I was in Madhya Pradesh a few days ago and noticed that two district hospitals were giving patients the e-card but weren’t going for the next stage of Transaction Management System, getting the preauthorisation, etc. Once you do that, then only will you get the money. Giving the card is only the first step… I don’t think most of these patients are coming just to take the card,” Bhushan explains.

As an initial target for states, each hospital should have at least one case in the next couple of weeks.
“That’s when we will know they are raising claims and using software correctly,” Bhushan says.

“How does this card help us?” his wife Poonam asks. “We anyway get free treatment at government hospitals. Also, my three children and I are still to get these cards.” Doctors at Gaya’s two government hospitals are faced with the same question by patients.

Bhushan says, “Many products like stents or other implants need to be bought. How will a poor person afford it? The answer is Ayushman Bharat. Also, government hospitals should have a tie-up with the private sector for providing such facilities free in case don’t have a diagnostic facility or if their MRI machine is not working.”

He admits the incentive may not be visible to patients yet. “Right now, public facilities are status blind. Anyone who comes will be given equal priority.

But if some people are coming with money (due to the health cover in the scheme), there is an implicit incentive to prioritise them,” he says.

Bhushan feels government hospitals should tell patients it is in their interest to use Ayushman Bharat services, as public hospitals will then get more money. “We hope that, slowly, they will have separate, good quality wards for Ayushman Bharat patients, so patients have an added incentive to go the extra mile,” he says.

Under the scheme, incentives go to the medical team at government hospitals and for improving infrastructure.

Private hospitals: Missing players
The two private hospitals in Bahraich empanelled under the scheme – Hasan Hospital and Badri Prasad Shukla Memorial Hospital – had no infrastructure for it. “The chief medical officer has to send a team to guide us. There were such tough conditions for empanelment but we fulfilled all,” a doctor here tells ET. He points out that 64 diseases will not be treated at private hospitals under the scheme — not even the most frequent medical procedure, pregnancy.

Bhushan is optimistic the situation will change as the government is “creating a buying power where none existed earlier” for private hospitals.

“If I’m an entrepreneur,” he says, “I would see this as a lucrative business opportunity to set up at least one big hospital in these regions as 40% of the population is being covered and has cards that entitle them to treatment worth `5 lakh. The private sector may not realise it now, but will soon.” 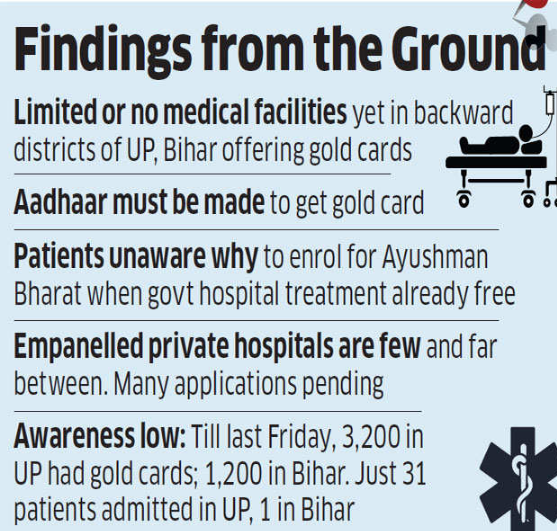 Bhushan says the larger aim is to change the present situation wherein the bottom 40% of the population rarely goes to private hospitals for services.

But a lack of quality private hospitals is a reality in Uttar Pradesh and Bihar. Existing ones blame stiff standards fixed under the scheme for empanelment.

A large number of applications from private hospitals are also said to be pending for empanelment.

“I have told states to first get all private hospitals on board. Either reject their (applications) or accept them within a week.

If you’re sitting over them, there’s potential for corruption,” says Bhushan.

He also justifies the tough criteria. “We want to get quality hospitals. It is a scheme for poor people, but not for poor quality services. If you keep the bar low, all poor quality hospitals will come. Then, instead of helping the poor, we’ll end up creating a low level of services,” says Bhushan. He also proposes provisional approval to private hospitals to fix issues within six months.

What about awareness?
The Kashyap family in Bahraich says when they got a call to enrol for Ayushman Bharat, they thought it was for a house under PM Awas Yojana.

In Gaya, ET met patients with no idea if they were eligible. CSCs in villages, which should be spreading awareness, have clueless personnel.

Bhushan says that while CSCs and implementation support agencies should popularise the scheme, word of mouth would probably do the trick.

“Once the scheme starts going, there will be no stopping it because if one person gets the benefit in one village, then the entire village will know (about the scheme) and how to go about (getting the benefits),” says the CEO.

Bhushan expects 30,000 pre-authorisations daily soon, compared to 5,000 at present. “A scheme of such a scale cannot be understood by everyone on the first day. But I can guarantee that within six months, everyone will know,” he promises. Cut us some slack, he appeals.