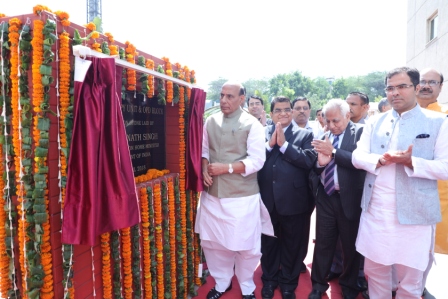 Mr Rajnath was speaking on the occasion of 63rd founder day of the multi specialty hospital. The incumbent Union Health Minister J.P. Nadda and his predecessor Ghulam Nabi Azad have already on previous occasions rated this hospital as best model in the country. He also inaugurated 11 floor multi-level car parking, which can accommodate over 800 vehicles and laid foundation stone of Radiotherapy & OPD Block.

Speaking on the occasion, Shri Ashok Chandra, Chairman, Sir Ganga Ram Trust society said, ‘SGRH is well known in non-government sector for having excellence both in academics as well as research. I am proud to say that our hospital apart from producing talented faculty for its own use is also a nursery for providing talented doctors for delivering health care services across the country.

Shri Rajnath Singh further said, ‘Health care spending by Government of India today is 1.2 % of GDP. Our Prime Minister has set a target of 2.5% of GDP which our Government will achieve soon. Income disparity leads to lack of health care for many in our society. To bridge this gap we have brought “AYUSHMAN BHARAT” .This is ambitious scheme which needs heavy investment especially in the field of preventive and promotive health care. For this our Government needs support of Private Sector.’

‘I have heard a lot of positives about Sir Ganga Ram Hospital and I feel from the core of my heart that this hospital is truly functioning as per the vision and wishes of its founder Sir Ganga Ram. Most importantly to provide affordable health care to all sections of the society,’ Mr Singh added.

Reading the Annual Hospital Report, Dr D.S. Rana, Chairman, Board of Management, SGRH said, “During the last financial year, 63907 patients availed our emergency services. In addition to this, the hospital admitted 93,130 patients in the hospital, out of which 8,131 were from economically weaker sections of the society who were treated free of cost. About 30,500 surgeries were conducted during the year. The hospital spent about Rs 70.86 crores on various charitable activities during the last financial year which is 10 % more than the previous year.”

Sir Ganga Ram was an engineer by profession who was born on 13th April 1851 at a village Mangtanwala of Punjab Province in British India, in present-day Pakistan. He graduated from Thompson College of Civil Engineering in 1873. In 1921, he established Sir Ganga Ram Hospital in Lahore which still functions by the same name and is a 500-bedded hospital attached to Fatima Jinnah Medical College.  He expired on 10th of July 1927 in London.  Sir Ganga Ram Hospital in Delhi was inaugurated in 1954 by then Prime Minister of India, Pandit Jawahar Lal Nehru and is today 800-bedded multi-speciality, tertiary care hospital