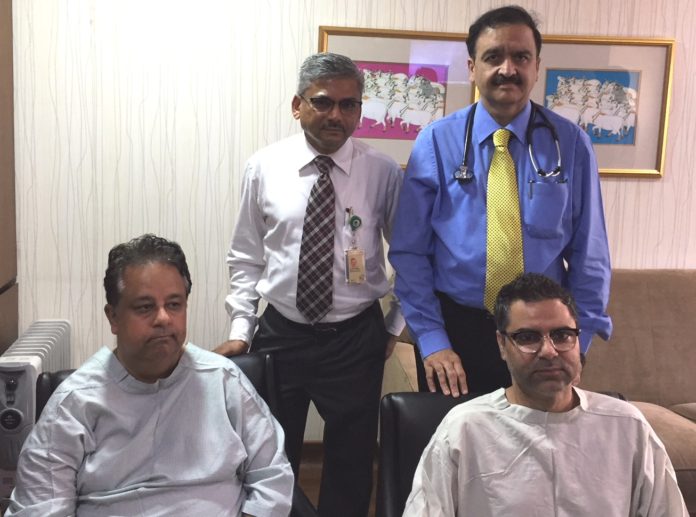 New Delhi: FAST is an acronym for an evolving stroke, standing for Facial drooping, Arm weakness, Speech difficulties and Time to call emergency services. If such symptoms suddenly develop, it is time to be fast forward to hospital to pre-empt the damage to brain.

Within three days, Indraprasth Apollo received two patients who suddenly lost his speech. One of them talked to his wife on phone saying he was just coming but soon when he was in front of his wife could not speak a word. Fortunately for them, they were brought to Apollo and lo and behold! They were saved from permanent disability and potential death. On April 12, Apollo showcased their recovery thanks to timely intervention to hammer home the value of golden hour after symptoms set in.

Brain stroke is a life altering event, which leaves the patient with some or other permanent damage to the body and mind. But in a rare case, doctors in Apollo successfully cured these two patients who had suffered from brain stroke and ensured that they get to live their normal lives.

Dr. Suri treated both the patients. While the first patient recovered significant speech within 1 hour only with the help of intravenous drug, the second case involving a 43 year patient required removal of the clot through a stent. He was treated in the DSA lab by Dr Harsh Rastogi, Interventional Neurologist. Intravenous drug and retrieval of clot through stent – these two therapies that can reverse the developing stroke conditions.

Stressing upon the importance of golden period which is 4.5 hours for IV intravenous and 6 hrs for mechanical thrombectomy, Dr Suri stressed that even within the golden period the earlier the treatment is started the better the recovery in treatment of stroke.
Facts of stroke is intimidating: a stroke claims a life every 6 second, 1 in 6 people worldwide have a stroke in life time, stroke is one of the leading causes of death and disability in India.