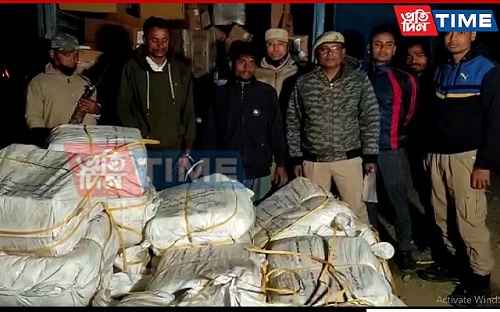 Hailakandi : Karimganj police on Saturday night seized 1900 bottles of phensedyl from Assam-Tripura bordering Churaibari area. Police sources said that two persons have been arrested in this regard. They have been identified as Anwar Hussain and Gulzar Hussain.

These cough syrup bottles were recovered from a vehicle bearing registration number AS-01-HC-6669 at the interstate border of Assam and Tripura at Churaibari. The vehicle was coming from Agartala of Tripura and was going to Guwahati via Karimganj.

Upon thorough checking, the police recovered 20 bags of Phensedyl from the vehicle. The market value of the seized consignment is approximately Rs 10 lakhs.

Meanwhile, the driver and conductor of the vehicle have been apprehended and they are being further interrogated by the police.

Police later arrested driver Anwar Hussain and handyman Gulzar Hussain. They will be produced in Karimganj court by police.

Further investigation is going on, informed a police officer.