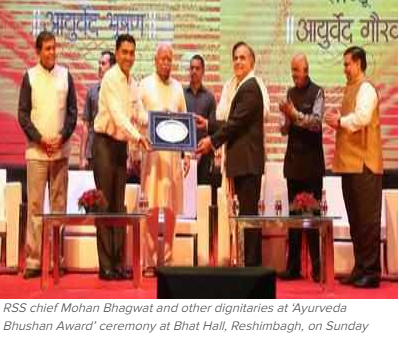 Nagpur: Ayurveda does not focus only on illness but also wellness of people and therefore it has been widely accepted in the country as a traditional science which has now set its foothold even in the western world, said Mohan Bhagwat, chief of Rashtriya Swayamsevak Sangh, on Sunday.

Speaking at a programme organized to mark the 119th foundation year of Sandu at Suresh Bhat Sabhagruh, Bhagwat said this ayurvedic medicine company has achieved success as it has delved deep into the ancient knowledge and followed it up with sustained research over a period of time. “The science of ayurveda is accessible to all. Therefore, it should be spread by its practitioners among the masses,” he added.

In his address, union minister of state for ayurveda, yoga and naturopathy Shripad Naik said, “It is important that efforts are made to bring this old and time-tested science at par with allopathy. Students of ayurveda should specialize in varied fields to achieve the goal.”

The Ayush ministry has plans to start 50-bedded hospitals in every district of the country and appoint ayurveda practitioners so that health care facilities reached those in need, Naik said.

Kuldeepraj Raj Kohli, director of ayurveda, Maharashtra, said, “Though going global, the ancient system of medicine is yet to reach several remote villages in the country. Practitioners, cultivators and manufacturers are the backbone of ayurveda and their role is important.”

Ayurveda is relevant and has no parallels in modern medicine. However, this field is yet to discover three kinds of medicines — anaesthetics, antibiotics and analgesics. Apart from these three, the whole gamut of disease profile is the subject matter of ayurveda which causes no side-effects if taken in correct proportion, Kohli said.

Procuring raw material for various ayurvedic products has been a challenge as many medicinal plants are becoming extinct due to deforestation. These are becoming expensive too. Therefore, standards should be set for accreditation of companies, he added.

Addressing the gathering, Shashank Sandu, director of the company, said, ayurveda is witnessing resurgence in the western countries which is indicative of the fact that it is being accepted there.

The Sandu Ayurved Bhushan Puraskar this year was given to Upendra Dixit, Satish Bhattad, Jyotishankar Tripathi, Santosh Nevpurkar and Mahendra Sharma for their contribution to ayurveda.