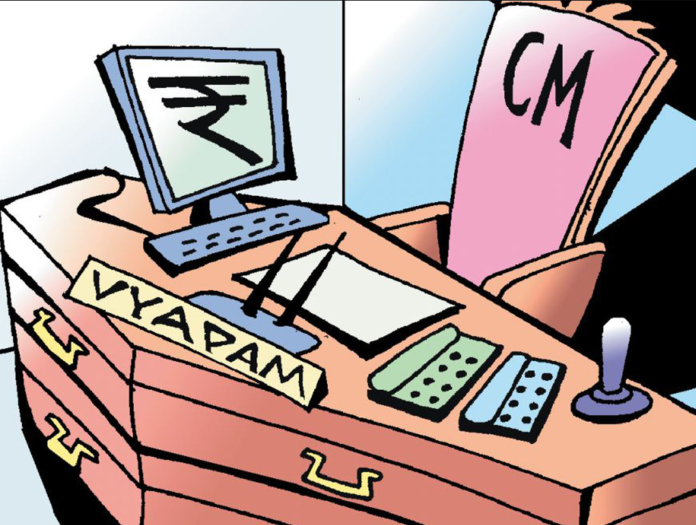 BHOPAL: CBI has given the clean chit to Rajasthan’s Arun Kumar Nimawat, a medical intern at Jhalawar Medical College, who was booked by MP STF as a ‘middleman’ in the Vyapam scam.

It’s apparently the first time that CBI has removed a name from the list of accused in STF’s FIR, taking many police officers by surprise. STF had even declared a Rs 5,000 bounty for his arrest. CBI’s note for not chargesheeting Nimawat says: “Sufficient evidence regarding his involvement in the case could not be found despite all efforts made during investigation. Hence, the allegations against him could not be substantiated. Therefore, the accused is not sent for trial and no action is proposed against him.”

STF wants CBI to probe Nimawat in 2013 scam too

Sources say STF put Nimawat’s name on record on the basis of the memorandum of Dr Sanjeev Kumar Shilpkar, who said he had given a list of 90 students to Vyapam’s chief system analyst Nitin Mohindra for “adjusting their seat” under the ‘Engine-Bogie’ scheme.

The deal was Rs 1 lakh per candidate of which Rs 10 lakh was paid in advance to Mohindra, says Shilpkar’s memorandum with STF.

“The list handed over to Nitin Mohindra was given to me by different people, including Sudhir Rai of Paramount Academy Indore, MBBS final year student Sonu Pachori of People’s Medical College, Vikas Singh of GMC, Amit Kumar Nimawat, intern at Jhalawar Medical College, and Ram Nivas of Kota Medical College among others,” reads Shilpkar’s memorandum.

According to Shilpkar, Nimawat brought six ‘engine’ students — those who would solve questions for the bogies —and was paid Rs 5 lakh in advance.

It was after this statement that Nimawat was booked and a reward announced for his arrest.

The situation change after Nimawat recorded his statement before CBI.

According to sources, he told interrogators that Nimawat had come to Bhopal along with cousin Ashish Swami in the hope of bagging paid seats in any private medical college.

“Sonu Pachori introduced us to Sanjeev Shilpkar, who was a doctor in Bhopal. Shilpkar told us that he will ensure admission for less money and we would not need to wait for the last date. He gave his phone numbers to Subash Chandra. Later, Ashish Swami gave his personal and education details to Shilpkar. After that we came back to Jhalawar and I have not been associated in the matter of Swami’s admission in Bhopal,” Nimawat told CBI DSP Kush, who gave him the clean chit.

Sources in STF, however, say that there was enough evidence against Nimawat. “CBI, it seems, did not investigate the money trail — the bank in which money was deposited in Rajasthan, call details, and a phone number that was used for filling up multiple PMT 2012 forms. They should examine his role in PMT 2013 also,” said an STF officer, asking not to be named.