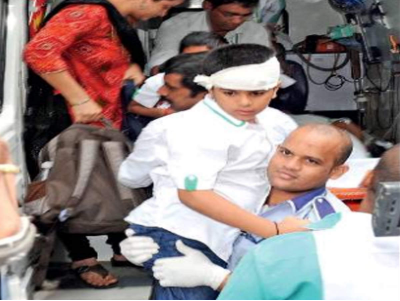 CHENNAI: Paediatric trauma – children injured in road accidents, falling from heights or within their homes – is now an emerging epidemic in the state, say doctors. In the past four months, the state-run Institute of Child Health in Egmore has recorded nearly 200 life-threatening trauma cases of children being wheeled into the emergency room with grievous head injuries, not breathing, in a state of shock and unconscious. The hospital had 195 cases of life-threatening trauma in 2015, 60 in 2016 and 52 in 2017.

“We receive around 1,000 trauma cases every year. This year, the number and severity of trauma in most cases have increased. Between January

The ICH is the only state-run paediatric hospital in Tamil Nadu. The increasing incidence of trauma among children makes a case for the need for a paediatric trauma unit that can handle all accidents and emergencies. For starters, the hospital needs a 24-hour CT scan facility and neurosurgeons. Now, all head injury cases are sent to the Rajiv Gandhi Government General Hospital for neurosurgery due to lack of adequate infrastructure.TimesView

and April, we had more than 700 trauma cases,” said Dr Indumathy Santhanam, who heads the emergency unit in the hospital.

A combination of reasons including unsafe driving, traffic violations, lack of paediatric helmets, high-rise buildings, children getting into altercations has led to the increase in trauma cases. Many children suffered moderate to severe symptoms of traumatic brain injury — a blow or jolt to the head or a penetrating head injury that disrupted the normal function of the brain. Although private hospitals in the city don’t receive many such cases, most hospitals said they have seen an increase in the severity of cases. At the emergency room of the Kanchi Kamakoti Childs Trust Hospital in Nungambakkam, consultant Dr R Radhika said the hospital had not recorded a huge increase in trauma cases, “but overall we know children who come to us are sicker than they were some years ago”.
Chennai : Kids injured in falls an emerging ‘epidemic’; 700 cases in four months

A study by Puducherry-based JIPMER — published in medical journal Indian Pediatrics — depicted the magnitude of the problem. It studied 911 children below 12 from its trauma centre over a period of 18 months with history of injuries. Three-fifths of the children had sustained injuries at home and among road traffic accidents victims a majority (40.5%) were two-wheeler pillion riders or pedestrians (31.9%).