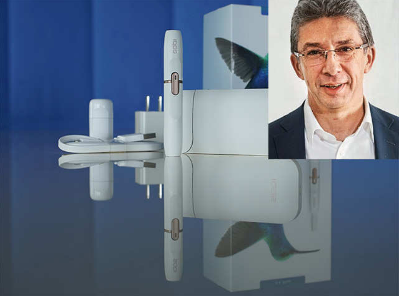 One of the most curious sights at Cannes Lions 2018 is a cabana on prime beach real estate along the Croisette. Bang on the hip strip, just past Facebook, Google, Twitter, IBM, Spotify and Pinterest and other snazzy social/tech brands, is Philip Morris International. “That Philip Morris?”, asked several festival regulars, wondering what the cigarette maker is doing at the Cannes Lions. PMI’s space has been smartly branded the ‘PMI Science Lounge’ and this is the first Lions for one of the world’s largest cigarette manufacturers. In most corners and tables in the white-washed lounge one can find packs of IQOS, PMI’s heat-not-burn tobacco system.

PMI started on a path to pivot its image earlier this year. Delshad Irani caught up with PMI’s global CEO Andre Calantzopoulos to ask what exactly the Marlboro Man, so to speak, is doing at Cannes Lions. Edited excerpts:

Why is Philip Morris International in Cannes?
We’ve embarked upon the path to essentially convince smokers to switch out of cigarettes, the ones that want to quit that is. But for that, you need three elements. You need products that are as close as possible to cigarettes and that are scientifically substantiated. The second is you need an organisation that can work with consumers and the commercial effort is very big, because it’s not so easy. Even if you tell people ‘this is better than cigarettes’, people need a lot of convincing. Alone we will not achieve it as fast as possible and to the magnitude that I hope. We need help from governments, public health and from people that can help us convince smokers and governments to act. Here in Cannes you have a community of such people. Rallying them to the effort is the opportunity.

But the brand Philip Morris comes with a lot of baggage.
‘Want to Tell Smokers There’s an Alternative’ This is not about Philip Morris. It’s about telling people there’s a better alternative if you can’t quit or don’t want to quit. Part of the effort is to convince governments around the world to differentiate tobacco products. But laws were written years ago, when electronic cigarettes didn’t exist even. You need legislation that, at a minimum, differentiates tobacco products, creates specific rules of how you develop, how you assess scientifically and how you communicate. That can dramatically accelerate both the speed at which people switch and the magnitude.

How challenging is this effort right now?
Today, clearly there’s is still a lot of division in the public health community — as a matter of principle whether they should allow products like this or not. Now, people talking public health is one thing but if you don’t offer smokers alternatives what are their options? Either quit or continue with cigarettes. That’s what sometimes people in public health, NGOs, don’t realise. At least this is a solution.