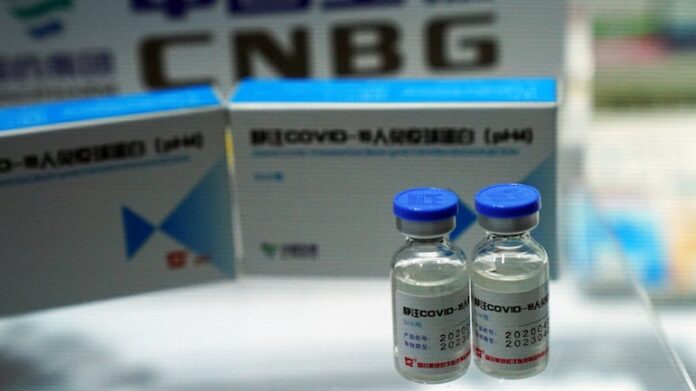 The International Monetary Fund (IMF) has said that international cooperation on a coronavirus vaccine could boost the global economy by $9 trillion to pull it out of the economic crisis. Meanwhile, in the global vaccine race, a Chinese vaccine has shown positive results in the human test.

A New York Times report has said the United States is probing Vaxart, a California-based biotech firm, over its claims on developing a vaccine against coronavirus.

The vaccine named BBIBP-CorV is being developed by the Beijing Institute of Biological Products, a subsidiary of China National Biotec Group (CNBG). The BBIBP-CorV vaccine is one of the top 10 coronavirus vaccine projects in the world that have entered Phase III clinical trials. Three of China’s vaccine candidates are in Phase III trials, according to WHO.

The Chinese vaccine trials have shown it has not caused any severe side effects among the volunteers while common mild or moderate adverse reactions including fever and pain at injection sites, according to a paper published on Thursday in medical journal the Lancet.

California-based biotech firm Vaxart has come under the scanner of the US government over its claims on vaccine against Covid-19. According to a report in New York Times, Vaxart had said in June that the firm has been selected for the US government’s vaccine programme Operation Warp Speed. The announcement gave a major boost to Vaxart’s stocks.

Vaxart reaped $200 million in profits from share selling, however, the report has said that the company may have overestimated its claims on the vaccine.

Now, Vaxart has said it has received a notice from the US justice department over its role in the Operation Warp Speed programme. On the other hand, the company has also been slapped with a number of lawsuits filed by its investors for overstating the vaccine claims, said the report.

Speaking at a news conference after a meeting of the IMF’s steering committee, Georgieva also called on the United States and China to keep up strong economic stimulus that could help boost a global recovery.

She emphasized the need for coronavirus vaccines to be distributed evenly across the world in both developing countries and wealthy nations, to boost confidence in travel, investment, trade and other activities.

A coronavirus vaccine being developed by France’s Sanofi and US biotech firm Translate Bio is on track and the clinical trials are showing positive results on animals.

Sanofi and Translate Bio said in a statement on Thursday that the results from pre-clinical trials showed two doses of the MRT5500 vaccine induced a “favourable” immune response in mice and monkeys.

There is no internationally-approved vaccine to protect against Covid-19, which has killed more than 1 million people around the world and triggered economic chaos.

Sanofi and Translate Bio has confirmed that a phase 1/2 trial on humans would begin in the fourth quarter to test for safety and to determine the dosage before a possible final Phase III trial.

Scientists from Britain’s University of Oxford have developed a rapid Covid-19 test that is able to identify the coronavirus in less than five minutes, researchers said on Thursday, adding it could be used in mass testing at airports and businesses.

The university said it hoped to start product development of the testing device in early 2021 and have an approved device available six months afterwards.

The device is able to detect the coronavirus and distinguish it from other viruses with high accuracy, the researchers said in a pre-print study.

“Our method quickly detects intact virus particles,” said Professor Achilles Kapanidis, at Oxford’s Department of Physics, adding that this meant the test would be “simple, extremely rapid, and cost-effective”.