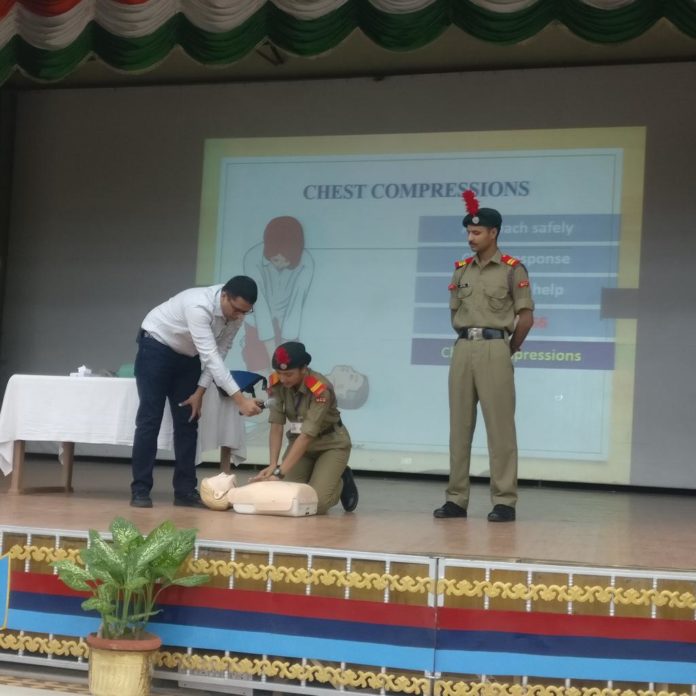 New Delhi: NCC Cadets trained in Basic Life Support can save thousands of life. This thinking led Apollo Foundation to create an army of such supporters from NCC cadets. Now, there is an army of 1600 NCC cadets who would come to rescue people in life threatening situations.

Apollo foundation conducted a training session to highlight the necessity basic life support (BLS) to the cadets of NCC. The core aim of the event was to equip the cadets with BLS knowledge and skills to handle critical cases in the future. Basic life support consists of a series of medical procedures which are provided to patients in the life threatening situation.

Basic life support, also known as BLS, is used to distinguish the types of medical care required to sustain someone’s life until they can receive more advanced care. Considering the importance of pre-hospitalization, it is necessary to acquire the knowledge and skills through education, adequate practice and good supervision.

Sending the message on the occasion, Mrs Upasna Kamineni Konidela, Vice Chairperson – CSR, Apollo Hospitals said, “Accidents and cardiac arrests account for the majority of emergencies, just as they often come with grave consequences. Immediate action, proper skills, and most importantly, basic life support (BLS) knowledge is usually required to handle emergencies. In such cases time is the greatest determiner of the fate. There is a significant lack of basic knowledge of dealing with these situations.”

According to World health organisation, heart disease is the world’s largest killer claiming 17.5 million lives every year. In India, death from cardiac disease was three times that of cancer. Cardiopulmonary resuscitation (CPR) is a lifesaving method which is a very important part of basic life support. CPR is useful during heart attack or near drowning, in which someone’s breathing or heartbeat has stopped. Thus, it is the need of the hour that every member of the community are trained in high quality basic life support

Dr Azharuddin, member of Apollo emergency team said, “While BLS procedure can be very useful, it is important to provide it the right way. There are mainly three components to check while performing BLS. These are circulation, airway, and breathing. First, the circulation of the patient needs to be checked. This is done to make sure that the heart is pumping blood properly to the organs. In some cases, chest compressions may need to be performed to ensure that blood is circulating throughout the body. Their airway also should be monitored for any foreign objects, sputum, or vomit to ensure that they are breathing. And lastly, breathing should be checked to make sure that the patient is getting oxygen into the lungs and vital parts of the body.”

The event witnessed the participation of 1600 cadets where they were given hands on training. Demo session was followed by a pledge taking ceremony to carry forward the noble cause of heart health. In the last 7 years, over 10,000 cadets have received the demo training owing to the association of Apollo foundation with the National Cadet Corp.