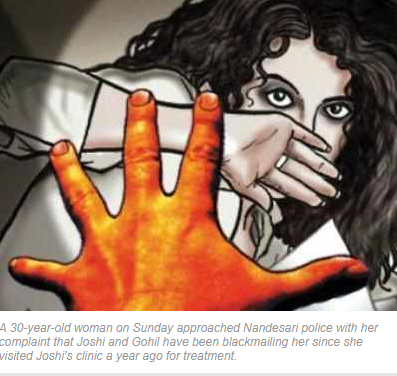 Vadodara: A homeopathy doctor, who was practising at Angadh village near the city, was booked for rape at Nandesari police station on Sunday. Videos of Dr Pratik Joshi getting intimate with multiple women went viral on social media on Saturday.

Police said Joshi, who lives in Gotri, was booked for rape, while his compounder Dilip Gohil, who had secretly recorded the videos in his mobile phone, has been booked for blackmailing and violation of Information Technology Act.

A 30-year-old woman on Sunday approached Nandesari police with her complaint that Joshi and Gohil have been blackmailing her since she visited Joshi’s clinic a year ago for treatment. The woman has alleged that Joshi gave her a medicine after consuming which she fainted. Joshi then raped her in his clinic while Gohil recorded the crime.

After 30 minutes, the rape-survivor gained consciousness and left for home. Three days later, the woman again went to Joshi’s clinic. Gohil then showed her the video in which Joshi is seen raping her. He threatened the woman that whenever Joshi will call her, she will have to come to the clinic otherwise he will circulate the video. He also told the woman that Joshi will also give her money.

According to the police, Joshi then called the woman eight times to his clinic where he raped her. The woman also told the police that she used to go to the clinic because she was afraid that Gohil will circulate the video.

On Sunday when the woman learnt about circulation of Joshi’s videos through newspapers, she approached the police.

“We will arrest the compounder soon, and also the doctor,” said J K Patel, police inspector, Nandesari police station. He added that once Gohil is held more details about the doctor and since when the duo was involved in the crime can be known.