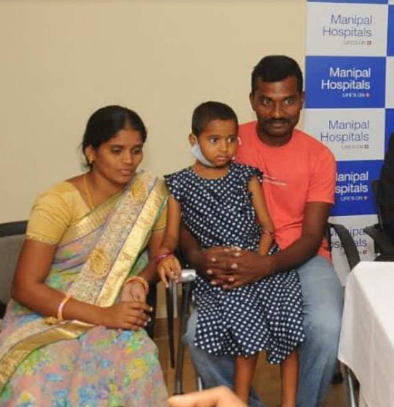 Dr Renu Kumar, Consultant Liver Transplant Surgeon who performed surgery says that Ramya a native of Piduguralla in Guntur district was badly suffering due to abdominal distention owing to the accumulation of fluid for one month, with loss of weight, Poor feeding and growth failure while admitted in hospital in the month of March 2018.

On further evaluation, we noticed that all the three hepatic veins were severely blocked and the major blood vessel (Inferior Vena Cava ) behind the liver was also completely blocked and she was suffering from ‘BUDD CHIARI SYNDROME’ a very rare condition with few cases reports in children, says Renu Kumar.

She was also found to have a rare associated thrombotic condition called as “Homocysteinemia’ and the only solution for this condition was a liver transplantation, says Renu Kumar. Girls mother K. Radhika came forward to donate liver tissue which saved the girl, he said.

Dr Olithselvan, chief of liver transplantation said, “It was an elaborate transplant as it took 7 hours to remove part of mother’s liver and baby’s surgery took 12 hours for the liver transplant. The whole surgery took 16 hours, but was definitely worth it.” Bennett University (Times of India Group) announces admissions to B.Tech, BBA, Integrated LLB and BA – Journalism & MassComm programs.