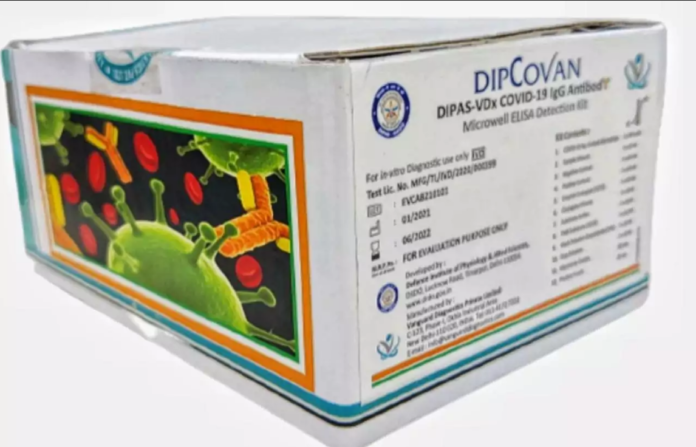 The Defence Research and Development Organisation (DRDO) has developed a Covid-19 antibody detection kit that offers results in just 75 minutes, the defence ministry said on Friday.

The testing kit is called DIPCOVAN and it offers a “significantly faster turn-around-time as it requires just 75 minutes to conduct the test without any cross reactivity with other diseases”, the ministry’s statement noted.

The kit has a shelf life of 18 months, it added.

“The DIPCOVAN kit can detect both spike as well as nucleocapsid (S&N) proteins of SARS-CoV-2 virus with a high sensitivity of 97 percent and specificity of 99 percent,” it mentioned.

The kit has been developed in association with Vanguard Diagnostics Pvt Ltd, a development and manufacturing diagnostics company based out of New Delhi, it said.

Vanguard Diagnostics will commercially launch the product during the first week of June, it noted.

“Readily available stock at the time of launch will be 100 kits (approximately 10,000 tests) with a production capacity of 500 kits/month after the launch. It is expected to be available at about Rs 75 per test,” it added.

The DIPCOVAN kit was developed indigenously by the DRDO’s scientists, followed by “extensive validation on more than 1,000 patient samples at various Covid designated hospitals in Delhi, it mentioned.

“Three batches of the product were validated during the last one year. The antibody detection kit is approved by the Indian Council of Medical Research (ICMR) in April 2021,” it noted.

India has been badly hit by a second wave of coronavirus infections, and hospitals in several states are reeling under a shortage of vaccines, oxygen, drugs and equipment.

With 2,76,110 new coronavirus infections being reported in a day, India’s tally of Covid-19 cases climbed to 2,57,72,440 while the daily deaths were recorded below 4,000 after four days, taking the toll to 2,87,122, according to the Union health ministry data updated on Thursday.