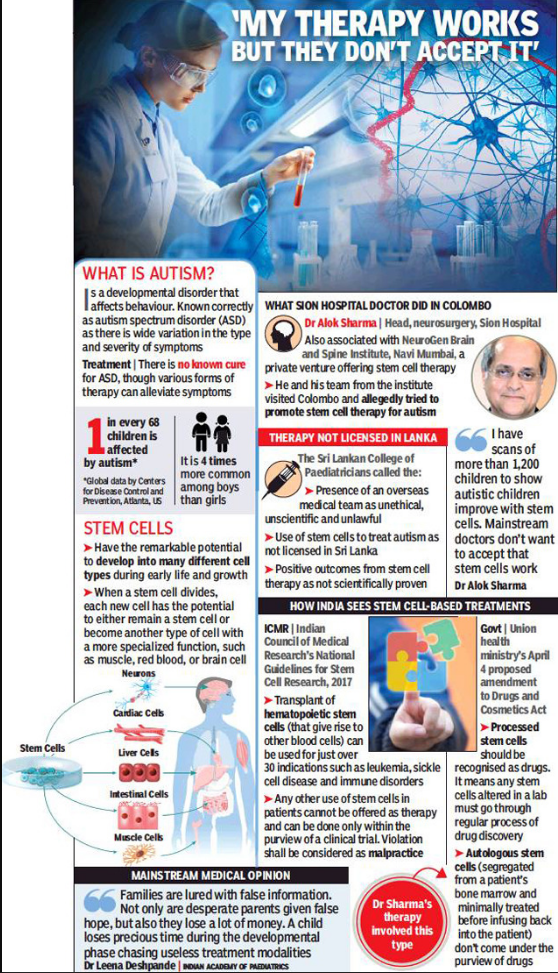 Like India, Sri Lanka’s scientific community doesn’t sanction stem cell therapy as a treatment for neurodevelopmental disorders, but there are no laws prohibiting it.

Alleging that Sion Hospital’s Dr Alok Sharma screened patients in a Colombo hotel after delivering a talk on the subject, the Sri Lanka College of Paediatricians (SLCP) put out a public notice warning people from falling prey to “unproven and exploitative therapies”.

Speaking to TOI, SCLP member Dr Samanmali Sumanasena expressed anger at Dr Sharma allegedly marketing the therapy for sums nearing Rs 6.6 lakh. “He or the company (NeuroGen Brain and Spine Institute, Navi Mumbai) had no authority to screen patients in our country without our medi council’s approval,” she said.

Dr Sharma is unfazed by the uproar. “The Lankan community has reacted just the way Indian doctors have over the years. We have MRI and PET scans of 1,200 children to show how stem cells have improved the problematic areas of the brain in autistic children. Nearly a third of these children have gone out of the autism spectrum.”

Explaining the technique, he said he injects stem cells derived from the bone marrow of such children and therefore it’s absolutely safe. But this very mechanism has been dubbed as flawed and even fraudulent by experts. Paediatric neurologist Dr Vrajesh Udani said, “Researchers have zeroed down on 11 genes that are believed to be involved in the pathogenesis of autism. Hence, whatever genetic defects a child has will also be present in the bone marrow. Also, it is unethical to charge patients for an experimental therapy.”

ICMR’s member Dr Geeta Jotwani said its guidelines don’t approve of stem cell use for autism (see graphic). “We framed norms keeping international regulations and research advances in mind,” she said. “The guidelines have a provision for clinical trials as well.” But Dr Sharma implied that conducting a clinical trial would mean depriving some children from stem cell therapy “that works”.