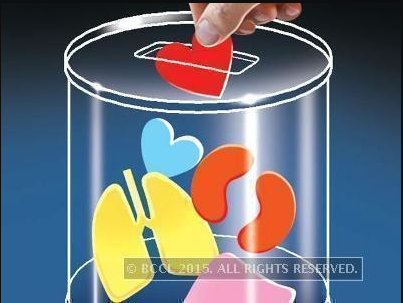 Nagpur: In a historic organ donation in Vidarbha, as many as eight organs were donated by the family of a 24-year-old woman from Amravati. It also marked the first time a heart and lungs were harvested in Amravati, and sent to Fortis Hospital in Mumbai, where both organs will be transplanted into a young woman. For the city, it also resulted in the first ever liver transplant.

The liver transplant surgery was still underway when the newspaper went to print on Sunday night. The donation had allowed liver surgeon Dr Rahul Saxena of New Era Hospital, the first to get liver transplant license in Nagpur in February this year, to undertake the first liver transplant of the city. The recipient is a woman. Since the operation was to go on till early Monday morning, the hospital has not released any information about the transplant.

The organs were harvested at Sankalp Hospital, the only Non-Transplant Coordination Centre in Amravati, run by Dr Avinash Chaudhari. He told TOI that his was the first time that lungs and heart were harvested from any patient in Vidarbha. The donor, an unmarried woman, was suffering from a brain disease since childhood, and was declared brain-dead by Dr Chaudhari at another hospital in Amravati, where the patient was under treatment. “The woman didn’t have parents. Her brother and uncle agreed to donate the organs after counselling,” he said.

The heart and lungs were taken to Mumbai on a chartered plane by Dr Santosh from Fortis Hospital. One kidney each was sent to Wockhardt Hospital, and Orange City Hospital and Research Institute (OCHRI). The eyes were donated to Harina Netra Pedhi in Amravati. The skin was harvested by Dr Samir Jahagirdar from OCHRI.