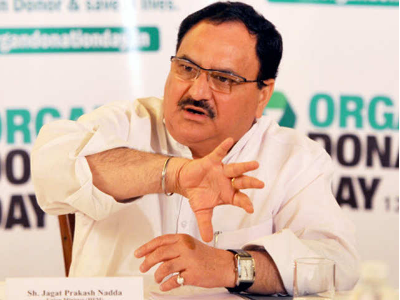 The union health ministry will sign memoranda of understanding with a “maximum” number of states on June 14 to launch the Prime Minister’s ambitious scheme to provide health protection to 100 million families, said health minister JP Nadda on Monday.

These states are expected to include Gujarat, Uttar Pradesh, Bihar, Chattisgarh, Madhya Pradesh and Jharkhand, according to data shared by the health ministry.

At the moment, five states and union territories are yet to confirm whether they would be implementing the Ayushman Bharat National Health Protection Mission (AB-NHPM) scheme.

This includes states like West Bengal and Odisha, according to the health minister.

At the same time, Kerala, which was previously undecided, has agreed to launch the scheme, said Nadda on Monday.

So far, around 12 states have signed agreements and deliberation is on with the rest, he added.

“Almost all states are on board,” Dinesh Arora, Deputy CEO, Ayushman Bharat National Health Protection Mission, told ET. “We expect about 20 states to be fully signed up by the end of this week and 25 states by 30th of June,” he added.

Some states are combining the schemes where the population to be covered is low and they can manage the difference, according to him.

The government is encouraging states to implement the scheme using the trust model, he added.

Around 10 states and union territories are expected to implement the scheme through a trust model, while five may do so through a mixture of trust and insurance, according to data from the ministry.

The IT platforms to launch AB-NHPM will be in place by mid-July, according to Nadda.

“All IT testing process is done. The moment we are confident that we are able to cater to 50 crore people, we will launch it (AB-NHPM),” he said.