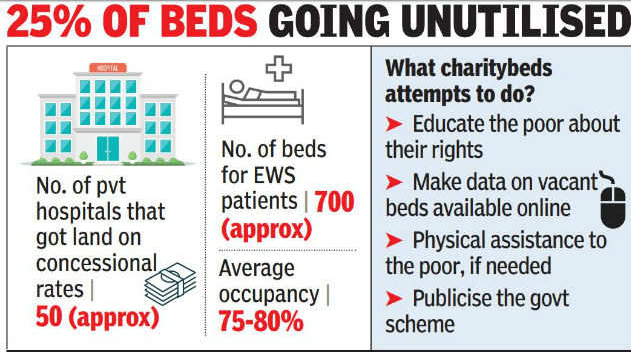 NEW DELHI: There are over 650 beds reserved for the poor in private hospitals that have got land on concessional rates in Delhi. But nearly 150 of them are always vacant. Apart from government officials and a court-appointed committee, some social activists have come forward to maximise the utilisation of the facility of free beds for the economically weaker sections. One of them, charitybeds.com, is run by former president of The Oberoi Group, Kapil Chopra.

Chopra told TOI that they update their website daily as per the list of vacant beds provided to them through the government website or private hospitals. “I have a few volunteers also. Their numbers are available on the website. We get more than 200 calls daily, seeking info on vacant beds, documents needed for admission, and in some cases, help to get admission,” Chopra said.

How these volunteers are helping poor patients find beds at hospitals

There are more than 50 hospitals in Delhi that were given land on concessional rates by Delhi Development Authority after the management of the hospitals promised free treatment to poor patients. But as they didn’t honour the commitment, Delhi-based NGO Social Jurist filed a PIL in Delhi high court for implementation of the agreement.

Gagan, a volunteer with charitybeds.com, said that often the poor aren’t aware of the law or their rights. “They are too intimidated to go to a luxury hospital and demand admission. Sometimes the hospitals refuse admission on grounds like unavailability of ICU facility or beds under the desired specialty. We try to intervene in such circumstances and find the right place for admission under EWS category,” he said.

Ashok Agarwal, eminent lawyer and activist who has been spearheading efforts to implement EWS policy, said occupancy rates have gone up significantly over the last few years.