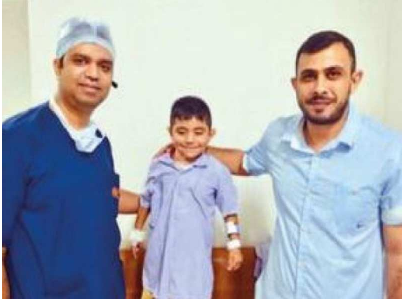 NEW DELHI: In a rare surgery, doctors at a private hospital in Faridabad recently removed a hormone producing tumour that made Hasan, a four-year-old Iraqi boy, look older — his face appeared more mature for his age and had facial hair. Even his voice was quite deep.

Stumped by this abnormality, Hasan’s parents got alarmed when they spotted a lump on the right side of his stomach. Doctors in Iraq found a tumour inside that had displaced the kidney and liver.

It was sitting on the adrenal gland and causing rapid production of male hormones due to which the child was showing signs of early puberty. The tumour had many arteries as feeding vessels from the surrounding vital organs like liver, kidney and aorta, which is the body’s largest blood vessel.

“Removing the tumour, therefore, was risky and many hospitals refused to take up the case and finally they approached us,” Dr Manish Kumar Choudhary, head of the department of urology and kidney transplant at the Faridabad hospital, said. He added that the tumour was also growing till the heart through the Inferior Vena Cava, which is the largest draining vessel of the abdominal organ.

“Had this surgery been delayed, the tumour clot from his heart would have travelled to his lungs, causing massive damage and even death. So, we decided to take up the surgery,” Dr Choudhary said.

The surgery, which was conducted last month, took nearly nine hours. First, the abdominal part of the tumour was dissected and removed the team of urosurgeons and general surgeons without damaging the kidney and liver to which it was badly adhered. It was 12 cm in diameter and weighed 762 grams. The second part of surgery included open heart surgery where one of the chambers was opened and the tumour clot removed from the heart and IVC, Dr Neerav Bansal, director of cardiovascular and thoracic surgery at the hospital, said.

The child, he added, took a week from the surgery and would now have to undergo chemotherapy and radiotherapy since the tumour turned out to be cancerous. “He is a brave child and a happy one. His parents have decided to pursue further treatment in Iraq itself,” Dr Bansal said.