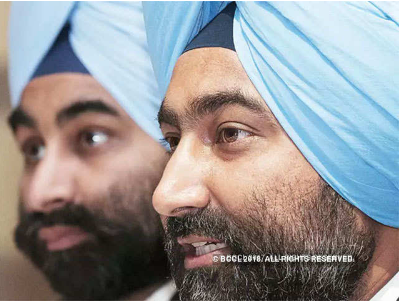 NEW DELHI: In a new finding related to allegations the Singh brothers diverted nearly Rs500 crore from Fortis Healthcare, the group is now suggesting the ex-promoters repaid some of this amount by taking out fresh loans through subsidiaries and routing t hem back as inter-corporate deposit (ICD) payments through a web of intermediaries.

Fortis Healthcare on Saturday noted that two of its subsidiaries had advanced loans that were used to repay outstanding unsecured loans to companies belonging to erstwhile promoters Malvinder and Shivinder Singh. Statutory auditor Deloitte Haskins & Sells has raised red flags about these loans, stating they were not pre-approved.

The first subsidiary, Escorts Heart Institute and Research (EHIRCL), advanced a loan to Fortis Healthstaff, which was used to repay Rs 7.95 crore to “a promoter group company”. This loan was granted after EHIRCL acquired 71% stake in Fortis Healthstaff for Rs 3.46 lakh, it told stock exchanges.

“Certain documents suggest that the loan repayment by Fortis Healthstaff Limited and some other payments to the promoter group company may have been ultimately routed through various intermediary companies and used for repayment of the ICDs/vendor advance to FHsL/company,” Fortis Healthcare told stock exchanges in its statement of standalone financial results.

It may be possible that the loan repayment by Fortis Emergency Services was also ultimately routed from the promoter company through intermediary companies for similar repayment of ICDs or vendor advances to Fortis, it added. It did not disclose the loan amount granted to Fortis Emergency Services, how much stake Fortis Hospitals bought from the promoter company and the amount paid in the acquisition.

The identities of the promoter group companies involved in both transactions are also not clear.

“With regard to the above acquisitions, we are informed that the pre-approval from the audit committee was obtained for acquiring the equity interest, but not for advancing the loans to these subsidiaries,” stated Deloitte Haskins & Sells.

“Further, we understand that the aggregate of the amounts paid towards acquisition of shares and the loans given in the aforesaid transactions were substantially higher than the enterprise value of these companies at the time of acquisition, as determined by the group,” it said, adding that it was unable to determine whether these transactions are prejudicial to the interests of the group.

In light of ongoing investigations by regulatory authorities into the transactions, the Fortis board said at this juncture it was unable to determine whether a fraud has occurred.

Fortis’ latest disclosure comes two weeks after revelations that its subsidiary made inter-corporate deposits, or unsecured loans, worth Rs 494 crore to three entities linked to the former promoters without board approval. Following repayment, the outstanding amount of ICDs stands at around Rs445 crore, Fortis told BSE on June 27.

ET first reported in editions dated 13 June, 27 June and 5 July that inter-corporate deposits were routed from Fortis into three entities belonging to the promoter group – Fern Healthcare, Best Healthcare and Modland Wears. The inter-corporate deposits were also assigned to a third entity, Participation Finance that had bought loans from Religare, the financial services arm of the promoters, though that transaction was later unwound.

In the backdrop of an investigation ordered by Fortis’ audit and risk management committee, the company said its management reviewed some past information and documents in connection with transactions undertaken by the company and “certain subsidiaries”.

The figures reported in Fortis’ unaudited results on June 27 remain unchanged in the audited results, it stated in a release on Saturday. Fortis had earlier reported a net loss of Rs 934 crore in the financial year ended March 31, 2018, hurt by write-off of goodwill, inter-corporate deposits (ICDs) and advances.

The company also said that it was cooperating with the investigations and has also sought more time from the Serious Frauds Investigation Office to submit information requested by it.