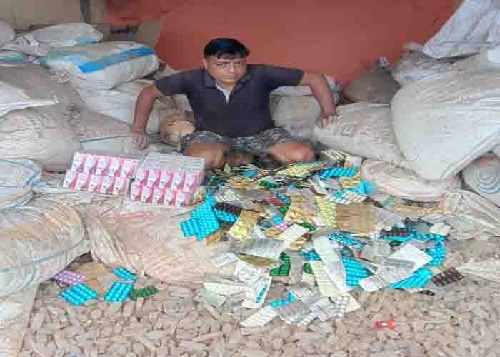 Roorkee : A large cache of counterfeit medicines was again caught in Haridwar’s Roorkee area on Thursday. STF had raided five godowns there. One of the accused was arrested from there, while another escaped. STF has recovered raw material worth lakhs of rupees from the godowns.

These medicines were being made under the labels of well-known companies. STF has also started searching for his other accomplices. SSP STF Ajay Singh said that last month, a fake medicine manufacturing was busted in Laksar area. After this, the STF was constantly monitoring such activities.

The STF team had got information about making fake medicines in Iqbalpur, Roorkee. Based on this information, raids were conducted on five godowns there. Here a person was arrested with the goods. The arrested person has been named as Nitin Jain, a resident of Premnagar, Dehradun, while Lokesh Gulati, a resident of Ramnagar, Roorkee, absconded.

Labels of various well-known medicines of the country’s big company have been put in these godowns. These medicines are used in the treatment of many diseases. During interrogation it was found that the godowns were taken on rent by him. Among them, the name of a person named Vishal has also appeared. STF has started collecting information. A case has been registered against the accused. He will be produced in the court on Friday.