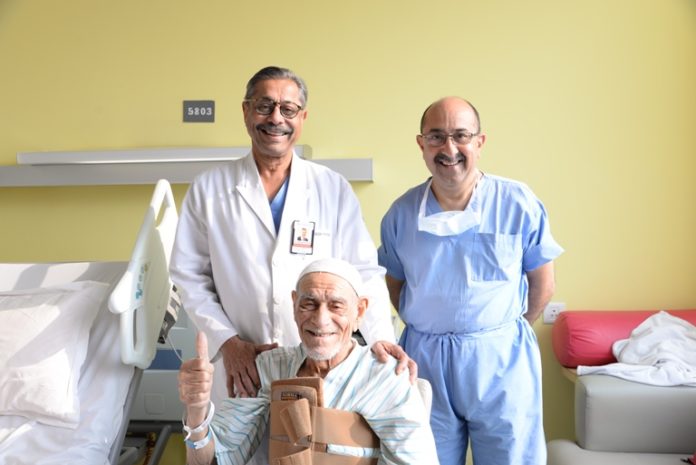 Gurugram/ Delhi: It seems Dr Naresh Trehan, globally renowned heart surgeon, is in ownership of all hearts under the sun. Where other heart surgeons fear to tread, he straddles with unique flair. So when he chose to operate upon a 98 year old cardiac patient, unprecedented benchmark was a fait accompli. Four bypasses were done to reroute the blood around the blockages!

Nonagenarian male Mohammed Kadheem Saeed from Iraq successfully underwent coronary bypass surgery at Medanta – The Medicity. Mr Saeed came to India seeking treatment for severely blocked coronary arteries causing him chest pain and discomfort. Medications were no help at all. He certainly needed the intervention for immediate relief in symptoms. It was by all means a long drawn out surgery and meticulous efforts went to conclude it successfully.

Negotiating risks associated with heart surgery in geriatric patients, a team of cardiac surgeons led by Dr. Naresh Trehan, Chairman and Managing Director, Medanta, decided to go for bypass. The team performed a full coronary artery bypass surgery to relieve the patient of the serious life risk. The patient is believed to be the oldest person to undergo bypass surgery.

Explaining the rarity of the procedure, Dr Trehan said, ‘This was a case of blocked blood vessels complicated by the patient’s advanced age. Four bypasses were done to reroute the blood around the blockages. Post-surgery, the patient is perfectly healthy and has returned to his country. His quality of life has considerably improved.’

Undoubtedly, Mr Sayeed was too old for bypass surgery. Mostly, heart surgeons turn down procedure on such aged patients because it is undeniably risky. Patients over 80 are considered out of bound for heart surgery. Significant health risks are associated with bypass surgery post 75 years of age. As medical evidence reveals, chances of survival is low in so aged a patient. Also, elderly patients who survive a bypass can may longer recovery times. Certainly, only an adept heart surgeon is called for.

Due to increasing life expectancy, there is growing number of patients who come to hospital seeking such interventions. According to a study, 8.1% of octogenarians died in the hospital after bypass surgery compared to 3% of younger patients in the study. But when the healthiest of the elderly patients without the other risk factors were looked at, the rate was 4.2% — not that much higher than for younger patients undergoing bypass. The study says even older ones can do well provided they are selected.

A study published in the Journal of the American College of Cardiology says bypass surgery isn’t just for the young. Older people can see improvements in their quality of life, too. Increasing blood flow to the heart can relieve chest pain and reduce the risk of heart attack. As bypass techniques have undergone a qualitative change, older people are increasingly being considered for bypass for improvement is quality of life.