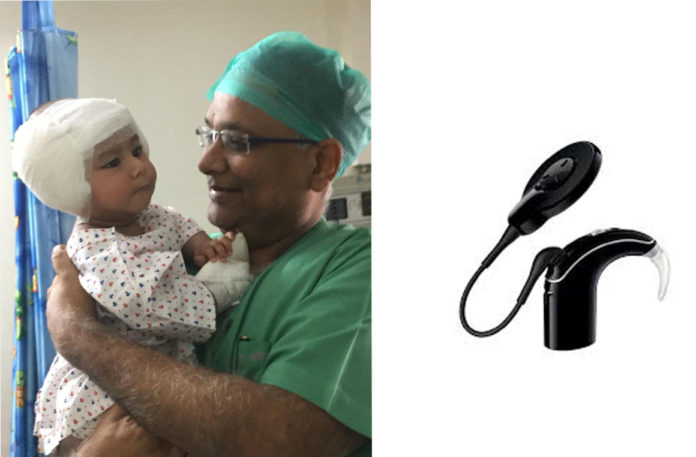 New Delhi: An 8 month old boy of Punjabi Bagh, New Delhi weighing barely 10KG becomes the youngest recipient of bilateral simultaneous cochlear implant in the country. This challenging procedure was done at Indraprastha Apollo. The boy was born with severe hearing loss in both ears. Very soon he will start clearly hearing his doting parents for the first time.

His parents bought him to Indraprastha Apollo Hospitals in an effort to find a treatment to restore his hearing. At the hospital, his case was referred to Dr. (Prof) Ameet Kishore, and then assessed by the audiologists at Sp Hear Speech & Hearing clinic (which supports the Apollo Cochlear Implant programme). He was initially fitted with hearing aids to ascertain the level of benefit, as per international protocol. The team eventually confirmed that the child would not get normal hearing with hearing aids, and the family was counselled for cochlear implants. Even though his young age of eight months presented a huge challenge, the doctors with the consent of parents decided to go ahead with the surgery.

Dr. (Prof) Ameet Kishore, Senior Consultant, ENT & Cochlear Implant Surgeon, said, ‘When dealing with hearing loss in children of such a young age, the most important part is to restore the hearing of the child as early as possible. In the child’s case the treatment of choice for good hearing restoration was cochlear implant, and on top of that, it was a important to restore hearing in both his ears (bilateral simultaneous cochlear implant), which means that implantation was done in both ears at the same time. It requires extensive surgical expertise and efficiency to safely handle a small eight months old baby, weighing just 10 kg, which is why many people would hesitate to do this surgery on such a little baby. With our experience of close to 1000 cochlear implants, this was not a concern as we have operated on many small babies safely and efficiently.’

The baby’s parents decided to outfit him with the latest cochlear implant Nucleus 7 (N7) devices, making him the youngest patient in the country to get bilateral simultaneous cochlear implant using the N7 device.

Dr. Kishore further highlights, ‘Nucleus 7 (N7) devices are the most recent cochlear implant devices in the world right now. N7 implants have a better chip and connectivity with digital devices. So such improvement in the quality of hardware and software further enhances the quality in sound that the patient gets, making it extremely good and clear.  Getting the latest and most sophisticated cochlear implant will help the baby to do very well in the future.’

‘The implantation surgery went well without any complications,” said Dr. Kishore, “Post the surgery, N7 devices have been switched on by the audiologists at SpHear Clinic where he is also receiving the much needed hearing and speech therapy.’

He has accepted the cochlear implants, is attending the clinic for habilitation twice a week and doing very well so far, Ms. Neevita Narayan, Audiology Director & Cochlear Implant Specialist at SpHear Clinic added.

Hearing loss impacts one throughout life. While people with mild to moderate amount of hearing loss can cope with this disability with the help of hearing aids, the ones who suffer from severe to profound hearing loss require cochlear implants to deal with the deafness. If the hearing loss is not treated early enough, the children born with hearing loss will not develop normal speech and language.

Biocon Biologics partners with Adagio to advance antibody for the management...