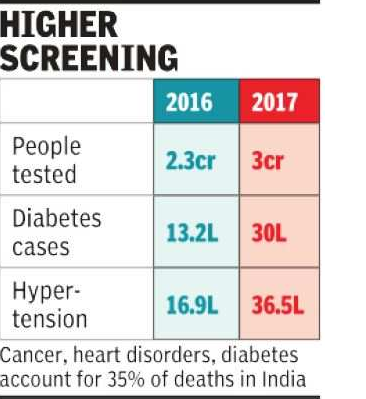 NEW DELHI: Diabetes and hypertension cases diagnosed under the government’s national screening programme have more than doubled in a single year, with more number of people visiting staterun clinics for screening of non-communicable diseases (NCDs) in 2017.

Data from the massive screening exercise, used by the National Health Profile (NHP), 2018, showed incidence of diabetes increasing by 128% to more than 30 lakh cases during 2017, as compared 13.2 lakh diagnosed in 2016. Similarly, the number of persons diagnosed with hypertension increased from 16.9 lakh in 2016 to 36.5 lakh in 2017, a jump of nearly 116%. Experts said the higher number of cases shows both increase in awareness as well as disease burden.

The number of people screened under the National Programme for Prevention and Control of Cancer, Diabetes, Cardiovascular Diseases and Stroke (NPCDCS) itself increased by 131% from 2016. In 2017, as many as 3 crore people were screened under the programme which focuses on preventive healthcare. In February 2017, the health ministry rolled out a massive free door-to-door screening programme for early detection of cancer, heart disorders and diabetes, which account for over 35% of all deaths in India.

The government plans to cover 200 districts by the end of 2018 and may also add screening of respiratory diseases.

“This is an excellent move because it has increased awareness among people. As a result, now more people are coming forward for screening and therefore, detection is higher. However, simultaneously, the disease burden is also increasing rapidly,” said Dr Anoop Misra, chairman, Fortis C-Doc. Of the total 3 crore people screened, the incidence of diabetes was found to be 8.4%, while that of hypertension was 10%.

Besides diabetes and hypertension, the NHP also recorded 0.1% incidence of common cancers (oral, breast and cervix), 0.37% of cardiovascular diseases and 0.13% of stroke. Among communicable diseases, rabies had 100% fatality (total 97 cases) and Japanese encephalitis recorded 12% deaths. 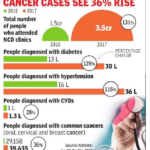 NCDs such as cancer and diabetes are responsible for 55% of premature deaths in the age group of 30-69 years. While the government has set deadlines to eliminate communicable diseases such as tuberculosis and kala-azar, it is focusing on timely screening and preventive measures by creating awareness to tackle the rising incidence of NCDs.