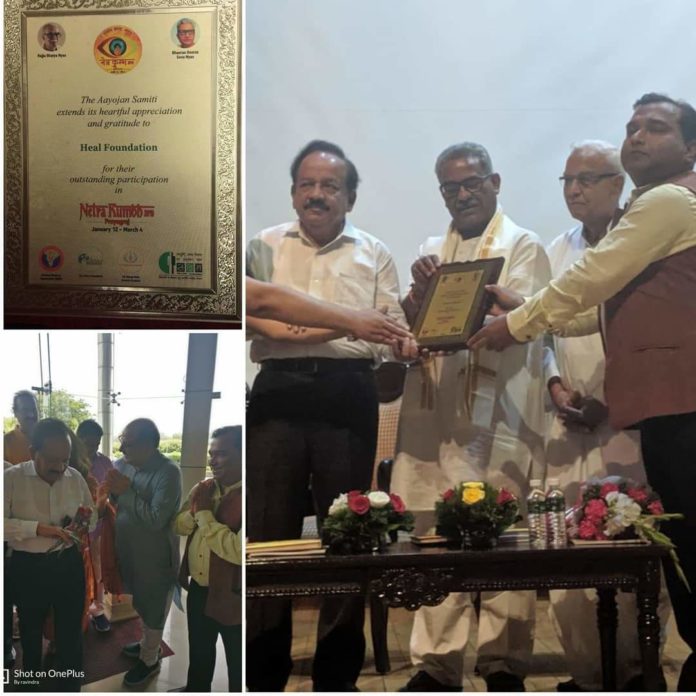 New Delhi: Kumbh Mela in last January –March witnessed an unprecedented eye screening. The initiative was befittingly called Netra Kumbh. Given the enormity of vision related problems, initiative on such vast scale is the need of the hour. Dr Harsh Vardhan commemorated the initiative in Delhi to underline the need.

Considering the vast and wide spread reach of Kumbh mela, many organisations have made it the launch pad for their initiatives. One such noteworthy initiative undertaken at Divya Kumbh 2019 is Netra Kumbh which provided free eye check-up and spectacles to the masses.

According to the World Health Organisation, there are around 180 million visually disabled people worldwide. Of these, between 40 and 45 million people are blind and India is the home to 15 million of them. Sadly, 75% of these people suffer avoidable blindness, thanks to the country’s acute shortage of donated eyes, optometrists, and low healthcare knowledge. 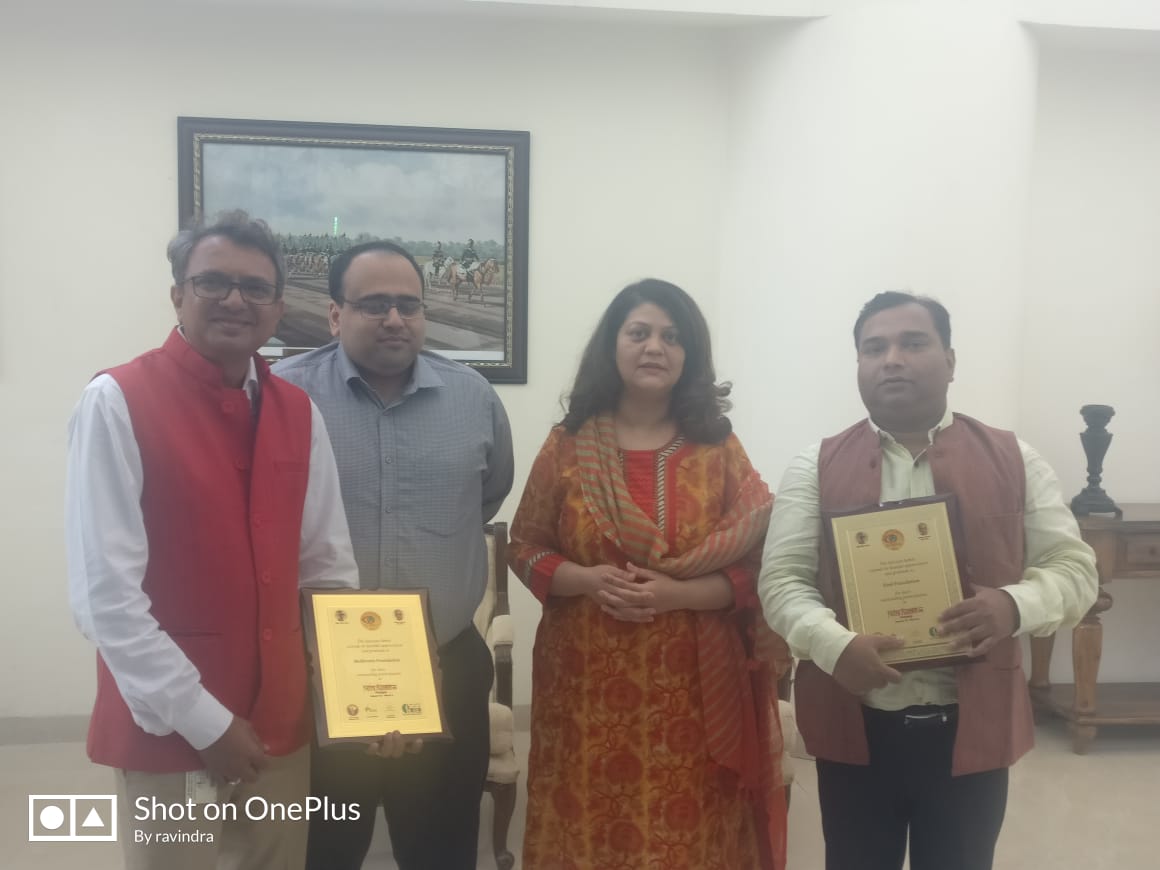 The initiative also attempted Limca book of records for maximum number of people screened in a day during Prayagraj Netra Kumbh. As many as 6,660 people were screened which is three times more than the last record which was 2,067. Overall, 2, 02,020 people were screened of which 1, 56,020 patients were given free spectacles. In a bid to commemorate and honour the initiative, a ceremony was organized today at Manekshaw Centre, Dhaula Kuan. Dr. Harsh Vardhan, Union Health Minister, graced the occasion.

Speaking about the initiative, at the event, Dr. Vardhan said, “Vision problems are very common across the country and there is also a lack of understanding and knowledge about eye health among the population of India. Netrakumbh is indeed the need of the hour and is a major step towards decreasing the burden of vision problems. I would extend my warmest congratulations to everyone for this magnificent initiative.”

Dr. Harsh Vardhan also facilitated the award to HEAL Foundation for ”Exemplary contribution to the Grand success of Netrakumbh at Kumbh 2019 at Prayaagraj’. HEAL Foundation, a not for profit organisation,aims to nudge masses towards healthier practices by spreading awareness around relevant health issues. 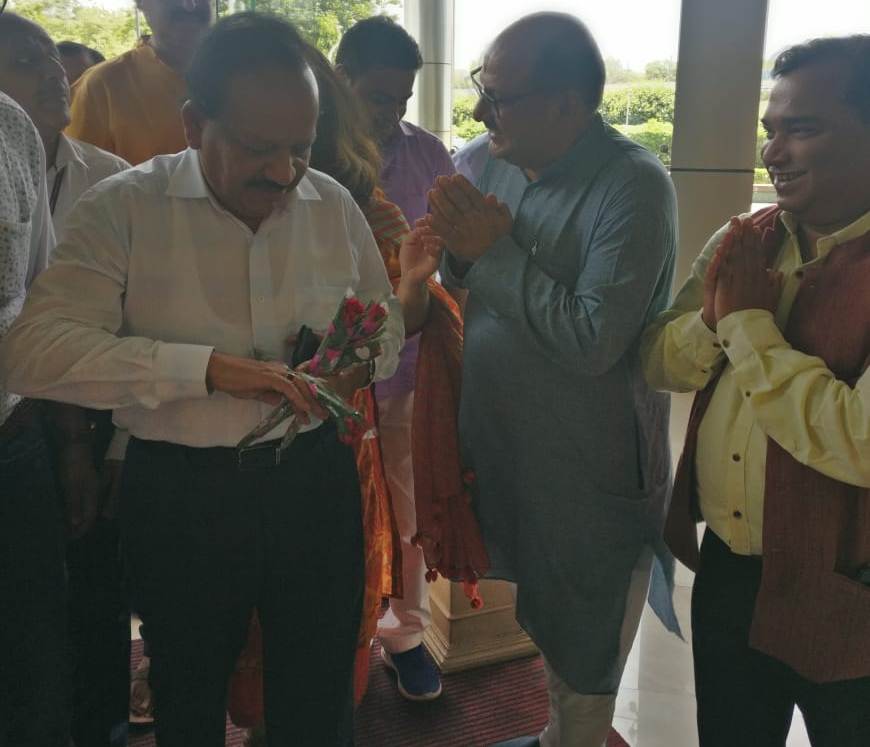 Speaking about the prestigious award, Swadeep Srivastava, Founder, HEAL Foundation, said, “Netra Kumbh is indeed a visionary attempt for vision related problems and is the need of the hour. We are very happy to be associated with such a significant platform. HEAL firmly believes that by changing health seeking behavior of all individuals and making health a priority for everyone, India’s disease burden will decline and our health status shall improve leading to country’s growth at all levels. “

A souvenir which focuses on all the health initiatives taken up by several organisations at Kumbh 2019 was officially launched at the event. Besides, a special documentary and an exhibition around Kumbh was showcased. The event was also graced by Swami Chidanand Sarasvati Ji Maharaj, Dr. Krishna Gopal, Joint General Secretary of Rashtriya SwayamsevakSangh, Dr. G.N Rao, Chairman, LV Prasad Eye Institute and several other industry leaders.

Dr. Rashmi, Member of SanchalanSamiti of Netra Kumbh said, “Around 11 million people live in a state of avoidable blindness in India and most of these have not even visited an eye specialist in their life. Netra Kumbh assessed thousands of people every day with a distinction of being the longest eye hospital camp in the world, which ran throughout the length of the Prayagraj Kumbh. This was Netra Kumbh’s first ever. With the response received from visiting pilgrims and support of our partners and well-wishers, we would now like to make it a regular affair at all Kumbh Melas.”