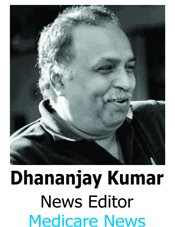 This action of oversight committee has given country’s medical education regulator MCI, which itself has for long earned the sobriquet of being a ‘Den of Corruption’, a long rope to smear the watchdog panel with the same brush.

New Delhi: Medical Education ‘upheaval’ in India has taken a curious turn. The BCCI fame oversight committee (OC) set up by Supreme Court to keep vigil on Medical Council of India (MCI)’s doings has itself got eggs on its face. It is due to committee’s blatantly unethical orders to Union Ministry of Family Welfare and Health to allow over 80 abysmally substandard medical colleges to admit students, which has imperiled the career of over 10 thousand students.

Ironically, the mandate given to OC by the apex court was to not allow MCI to indulge in corruption.

This action of oversight committee has given country’s medical education regulator MCI, which itself has for long earned the sobriquet of being a ‘Den of Corruption’, a long rope to smear the watchdog panel with the same brush. Dr. Ajay Kumar, a renowned urologist and Chairman, MCI’s Grievance Redressal Cell, has made bold to impute corruption charges on OC. He has given this Supreme Court panel a tag of being ‘Ocean of Corruption’ in one of his Facebook posts. Dr. Ajay Kumar’s purported Facebook post, in which he has directly named BCC fame justice Lodha, has gone viral among doctors fraternity. Mr. Lodha is the head of oversight committee.

Thus goes his post: ‘This is what Mr.Lodha & co is doing to improve the quality of medical education in the country. MCI had strongly recommended not giving recognition to such colleges. I have knowledge that money is flowing through the RIVER OF CORRUPTION leading to the OCEAN OF CORRUPTION ( O C or oversight committee) appointed by Supreme Court of India.’

Before this direct dig at the panel, one of the officials of MCI, which is fighting a losing turf battle, while talking to Medicare News, named the panel in a subdued reaction as ‘Over-Shit’ on Medical education. Incidentally, Medicare News was the first newspaper which published news about Oversight Committee’s controversial act. After which, many newspapers including Hindustan Times and TV channels sent their reporters to verify some of private colleges given go ahead by OC and found that those colleges were not at all worth the name. They were really in shambles and did not merit recognition or permission to admit students. This order of oversight panel has really given the impression that MCI is ‘more sinned against than sinning’.

Ever since Dr. Ketan Desai, a super influential Gujju urologist, took over the stewardship of MCI, it has always been under Court’s lens, so much so that a high court of the country once dubbed it ‘Den of Corruption’ a tag it never could shake off. A time came when Dr. Desai, currently president of World Medical Association, was removed by the court imputing corruption on him.

When he came back as president of MCI again, he was arrested by CBI as being caught taking 2 crore bribe from a medical college in return for giving recognition. Though Ketan Desai is nothing in MCI now but it is still in his grip and is being run by all his men.