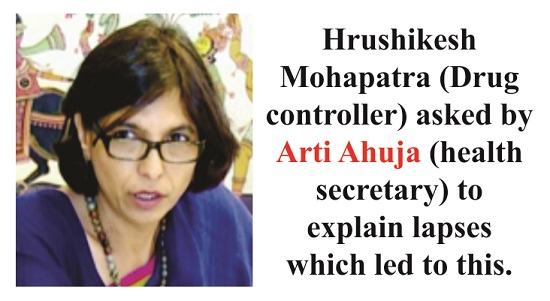 JBSL Chemicals and Pharmaceuticals had claimed to have a manufacturing unit in Himachal Pradesh’s Solan and a marketing wing in Mohali, Punjab. When the Vigilance verified, it found that no such units existed nor was any license issued by the respective State Governments.

Parveen (Bhubaneswar): JBSL Chemical and Pharmaceuticals Ltd which was manufacturing anti-cancer drugs without any valid license and drug controller admin. Is blamed for this scenario. Hrushikesh Mohapatra(drug controller) asked by Arti Ahuja (health secretary) to explain lapses which led to this. The company is in the centre of controversy after State Vigilance detected that an oncologist couple of Archarya Harihar Regional Centre for Cancer (AHRCC), Cuttack prescribed anti-cancer drugs marketed by the firm to patients who availed Government assistance under Odisha State Treatment Fund (OSTF) and Biju Krushak Kalyan Yojana (BKKY).

Sources in Drug Control Administration said the Secretary’s letter has expressed deep concerns that Drug Controller failed to identify JBSL as a non-existing entity operating in the State. When State Government is focusing on getting rid of such unscrupulous elements in the sector, the actions taken are inadequate and not timely, it added. The couple, Dr Surendranath Senapati and Dr Diptirani Samanta along with proprietor of JBSL Sudhansu Das have already been arrested by the anti-corruption wing.

The State Vigilance investigation had revealed that the prescription of JBSL drugs continued for two years beginning December, 2013 when anti-cancer drugs were available at authorised drug stores and patients could use the OSTF and BKKY to get them for free.

Ahuja’s letter also pointed out that the high price of the drugs caused the State Government to suffer a huge loss as general public who availed OSTF and BKKY had to pay a hefty price and exhausted their threshold spending. The Vigilance had estimated that the prescription of JBSL’s drugs by the oncologist couple caused a loss of over 26 lakh in two years to the State Exchequer.