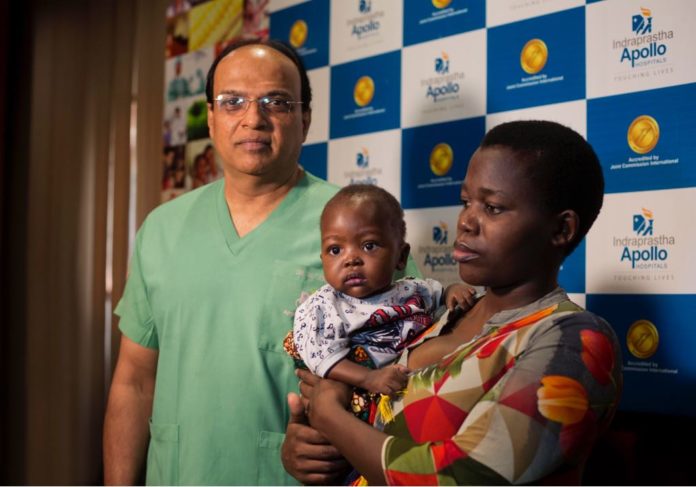 New Delhi: Surgery was the only option and chance of survival of one year old boy from Tanzania was 50/50. It took the nerve of the surgeon of Indraprastha Apollo and over 7 hours of high risk surgery to successfully correct one of the most uncommon congenital heart conditions in which he had a large hole in his heart and only one lung.

And Apollo too was the only option left for the despairing mother because all other big hospitals in Delhi and NCR had refused to take up the case, citing very high risk. Dr Muthu Jothi, Senior Consultant- Pediatric Cardiothoracic surgeon, who operated upon the precarious child, said, ‘50%, is huge risk in surgery but the hospital decided to come to the rescue of the child come what may. Most probably this is the first surgery of this kind in India. We are happy surgery went all well and the boy you can see is now alive and kicking. We can now say that the child now onwards would live a near normal life.’

The rare congenital heart disease the boy was suffering from is known Hemitruncus. Doctors who teamed to save the child from impending death also included Dr AK Ganjoo- Senior Consultant, Cardiology, Dr Deepa Sarkar– Consultant, Pediatric Cardiac Anesthetist and others.

Explaining the case, Dr. Muthu Jothi, said, ‘A normal heart has four chambers and four valves, where one blood vessel carries blood to the body and the other one to the lungs. In this case, the patient had no right lung and no blood vessel going to the right lung.  He had only left lung and the left pulmonary artery arising from the aorta. It’s called Hemitruncus (Half truncus). The patient also had a big hole in the heart. Normally the oxygen saturation levels are around 95 – 100 but as the child had recurring chest infections came in with a saturation of 35.”

Dativa, mother of the boy, felt so very indebted to the hospital and the doctors who snatched him from the jaws of death. She said, ‘ we had become hopeless till we came to Indraprastha Apollo because all other hospitals we went to refused point blank to take up the case.’

Dr Jothi further said, ‘In order to treat the disorder, we first closed the hole in patient’s heart. We detached the left lung blood vessel coming from the aorta and then between the left lung blood vessel and right side of the heart we engrafted a tube. The tube is made up of cow’s veins known as ‘Contegra’. The veins also have valves which we used between the right heart and the lungs. Now, the Contegra is supplying blood to the left lung. As the patient had only one lung, he took a long time to recover. He was off the ventilator but we again had to put him on ventilator for about 10 – 12 days because of breathing issues. Later, we kept him on mild oxygen with pressure. He is doing well now and is good to go back to his country.’

‘The boy will need to be on medication for some time and needs proper care as he just has one lung to perform all the functions,’ Dr Jothi added.

‘My child used to be very sick. He used to cough a lot and had terrible sweating when he was just two weeks old. We consulted the doctors in Tanzania first, but he got no relief. With time, his nails and tongue also started turning blue. Then we decided to come to India for his treatment. All thanks to the doctors here at Apollo Hospital who agreed to perform his surgery as most of the doctors refused to do the surgery.’ Visibly happy mother added.