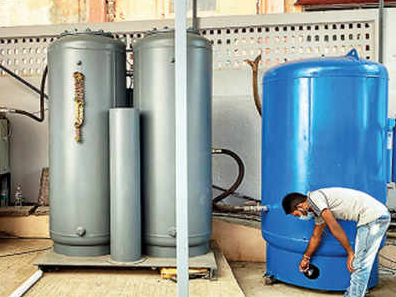 PUNE: With the second wave of the pandemic firmly on the ebb, medical experts have laid stress on oxygen banks for private hospitals and oxygen plants at civic hospitals to avoid a repeat of an acute shortage such as the one in April.

Experts said a dedicated oxygen bank operated by civic bodies would go a long way in meeting the needs of private hospitals, many of which – especially small and medium units – rely on private vendors for supply.

“Generally, big hospitals have their own plants, but small and medium facilities are reliant on suppliers or refillers. In such case, a permanent oxygen bank will prove quite helpful, as they can respond early to an SOS call,” Sanjay Patil, chairman of Indian Medical Association’s Hospital Board of India, told TOI.

Patil said Pune Municipal Corporation (PMC) had set up a temporary oxygen bank at Sassoon General Hospital during the second wave and proved quite helpful. Such a move, when permanent, would be helpful.

Subhash Salunke, advisor to the state government on Covid-19, said building up oxygen capacity is the best way forward. “We hope that some financial assistance would be offered to hospitals, which could help them construct their own plants,” Salunke said.

Pune mayor Muralidhar Mohol said PMC has set up four oxygen generation plants and that eight more were in the pipeline. “We have managed to increase our oxygen storage capacity to 52 metric tonnes. This will help us create better reserves in case of a rise in demand from civic or private hospitals in the future,” Mohol said.

Pimpri Chinchwad municipal commissioner Rajesh Patil said two civic hospitals can now cater to the needs of 200-and-odd patients. “Seven more plants are under construction and should be ready by this month-end,” Patil said.

Pune FDA joint commissioner Suresh Patil said oxygen consumption has gone down drastically in the district — 125 metric tonnes per day, from a peak of 363 MT/day.

Additional collector Vijay Deshmukh said the trials of Oxywin and Oxychain apps were underway at Sassoon, Devyani and Baramati hospital.

Oxychain involves the manufacturer, supplier, and refiller. The app gives real-time data on how much liquid oxygen was produced, how much was supplied and to whom. Oxywin is a dashboard for real-time patients’ oxygen saturation data.