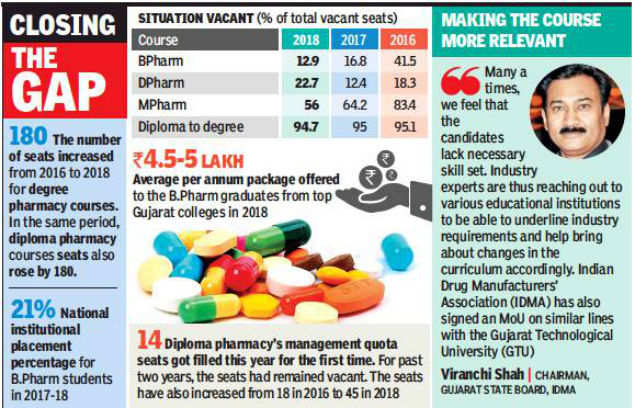 AHMEDABAD: The state being hub of pharmaceutical industry, it does not come as a surprise that the majority of 5,000-odd seats for the Bachelor of Pharmacy (BPharm) were filled for the year 2018-19 academic year. In fact, the vacancy rate of 12.9% was the lowest among all the courses where the centralized admission is overseen by Admission Committee for Professional Courses (ACPC), Gujarat.

It was not the scenario always. In 2016, 41.5% of the seats had remained vacant. But the sector is riding on hopes of better market and employment scenario.

Viranchi Shah, chairman of the Gujarat State Board, Indian Drug Manufacturers’ Association (IDMA), said that there would be a greater demand for technical persons with increased economic activity in the pharmaceutical industry in Gujarat. “Moreover, with change in certain norms for pharma industries, the requirement for technical experts especially in areas such as pharmaceutics, quality assurance and even pharmaceutical chemistry, would be greater.”

Analysis of the admission figures reveals that even the MPharm seats — that saw 83.4% vacant seats in 2016 — came down to 56% in 2018. Dr R H Parikh, director of Graduate School of Pharmacy, Gujarat Technological University (GTU), said that the pharmacy courses are looking up in the state with more seats and opportunities. “While the courses are decided by nodal agencies across India, where the institutions can play a major role is to bridge the gap between the curriculum and industry expectations. We thus engage with industry on a regular basis,” he said.

But the experts also warn about the quality of students and seasonal ups and downs. A senior ACPC member mentioned that in B Group, pharmacy is the choice of course after medicine. “But the student will do well if he/she is interested in the field. The trends and pay package might go up and down but given the state’s stronghold in the industry, we feel that the demand will be constant,” he mentioned.