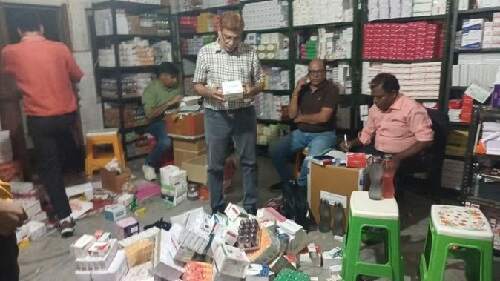 Aligarh : The divisional team of Food Safety and Drug Administration on Thursday seized a warehouse of Pride Pharma located in Fafla Bazar for selling unlicensed medicines. The divisional team of Aligarh drug inspector Hemendra Chaudhary, Hathras Deepak Kumar and Kasganj drug inspector Ramesh Chandra, under the leadership of Assistant Commissioner of Food and Drug Administration, Puran Chandra, reached Fafla drug market on Railway Road at around one o’clock in the afternoon. A large quantity of medicines have been found in the godown, the value of which has been estimated to be around Rs 3 crore.

In the action that lasted for about nine hours, the team found stocked medicines worth about three crores here. According to the officials, the medicines were supplied without any bills. The team has taken 15 different samples of medicines and sent them to the laboratory for testing. Due to this action, there was panic in the medicine market. Many shopkeepers closed their shops fearing action.

The team reached Fafla drug market on Railway Road at around one o’clock in the afternoon. The team raided the warehouse here. This action was taken on the complaint of operating this warehouse without a license and selling medicines.

According to officials, there is a license for a medical store in the name of Mukesh Kashyap, but the warehouse was operating without a license. The team checked the godown and also saw the documents. A large quantity of medicines have been found in the godown, the value of which has been estimated to be around Rs 3 crore. The team has sealed the godown. This action continued till 10 pm.

Assistant Commissioner Puran Chandra said that the warehouse was operating without a license. On receiving the complaint, action has been taken to investigate and seize it. He said that the quality of medicines would be checked from the laboratory. Only then will it be clear whether the medicines are real or fake. He said that now a suit will be filed in the court against the warehouse operator regarding the warehouse operation. Due to this raiding action of the team, there was panic in Fafla market. Many chemists went away by closing the shutters of the shops.

In another action, on infrmation that a medical store is being run without a license in Karanpur of Mundhapande area of ​​Moradabad. The team of Drug Administration Department comprising Drug Inspector Mukesh Jain, Urmila Verma, Rajesh Kumar (Amroha) raided Aftab Alam’s shop in Karanpur  on Thursday and seized medicines worth five lakh rupees. The team claims that counterfeit medicines were being sold from the shop.