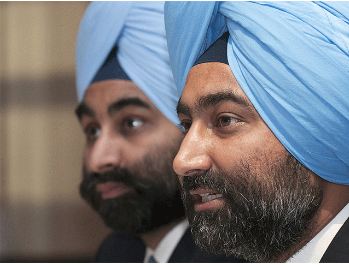 Former Ranbaxy promoter and founder of Fortis Healthcare, Shivinder Mohan Singh filed a case against elder brother Malvinder Mohan Singh in the National Company Law Tribunal (NCLT), citing oppression and mismanagement at RHC Holding, Religare and Fortis, marking a public rupture between the siblings after the business legacy they inherited slipped out of their hands amid accusations of wrongdoing.

“The collective, ongoing, actions of Malvinder and Sunil Godhwani led to a systematic undermining of the interests of the companies and their shareholders mentioned above as also the committed and loyal employees of the group,” Shivinder alleged in a statement. There were no responses to queries sent to Malvinder and Godhwani.

Shivinder said the action had been “long overdue” but he had hoped that “better sense” would prevail.

“While it saddens me immensely and I wish Malvinder well, I can no longer be party to activities in which transparency and ethics are continuously and consistently negated,” he said. “It has come to a point where this means that I am now disassociating from my brother as a business partner and will be pursuing an independent path going forward.”

Shivinder said he had wanted to spare his family the trauma of a public feud but insisted that he had played only a supporting role.

“For two decades now, Malvinder and I have been synonymous with one another,” he said. “Though the fact is, I have all along been the publicly supportive younger brother to Malvinder’s chairmanship of the group, who took decisions on behalf of the family.”

Shivinder said he had focused on Fortis Healthcare since its inception. “It is the only company I have worked for and all my intent and resources have been in nurturing this company,” he said.

Shareholders of Fortis Healthcare voted last month to approve a proposed $1 billion deal with Malaysian healthcare group IHH Bhd. IHH will pick up a controlling stake in the hospital chain by initially infusing around Rs4,000 crore for equity shares at Rs 170 apiece and subsequently initiating an open offer for additional stake.

After leading Fortis Healthcare for close to two decades, Shivinder said he moved out to devote himself fulltime to the Radha Soami Satsang Beas.

“I took public retirement to my spiritual home, Beas, to serve my master, in 2015, leaving the thriving company I founded in ‘trusted’ hands and in a period of less than two years, it has moved towards disintegration and ruin of a national healthcare asset,” he said. “My family reputation kept me a silent spectator, as I mutely watched the organisation I founded come to a point where it was publicly auctioned; where my family and myself have been stripped of our legacy, our finances and my personal credibility.”

Shivinder said he’d been unable to salvage the situation despite his best efforts on his return from Beas over the past few months.

“The continued systemic missteps resulted in a quicksand which now seems beyond resolution,” Shivinder said. “While the group businesses were in ‘competent’ hands, red flags have crept up in the group with disturbing regularity. Decisions taken in Religare’s NBFC arm; the transaction and subsequent management of the sale of the group’s then flagship Ranbaxy to Daiichi, culminating in one of the most damaging arbitration cases in the history of India Inc., the unimaginable losses accumulated in running a private charter airline business (Ligare Aviation), all these only go to show that the malaise is systemic.”

Godhwani ran the company after the brothers resigned from the board of Religare in April 2010 to focus on healthcare. Godhwani was also involved in running the promoters’ holding company RHC Holding.

After the death of father Parvinder Singh in 1999, Malvinder, then 27, had joined the company. Shivinder, then 23, was finishing his education. The two brothers inherited Ranbaxy and financial services firm Religare, in addition to a small aviation business. Shivinder and Malvinder cofounded Fortis Healthcare in 2001.

The sale of Ranbaxy to Japan’s Daiichi Sankyo in 2008 for $4.6 billion gave the Singh brothers the cash to fuel their ambitions. Religare made some half a dozen acquisitions and aspired to become a bank under the leadership of Sunil Godhwani. Fortis also grew rapidly through a dozen or so acquisitions in India and overseas.

The sale took place just months before the US Food and Drug Administration banned imports from two of the generic drugmaker’s Indian plants. That same year, the US Department of Justice launched a probe, eventually resulting in a guilty plea by Ranbaxy and a $500-million settlement for selling adulterated drugs.