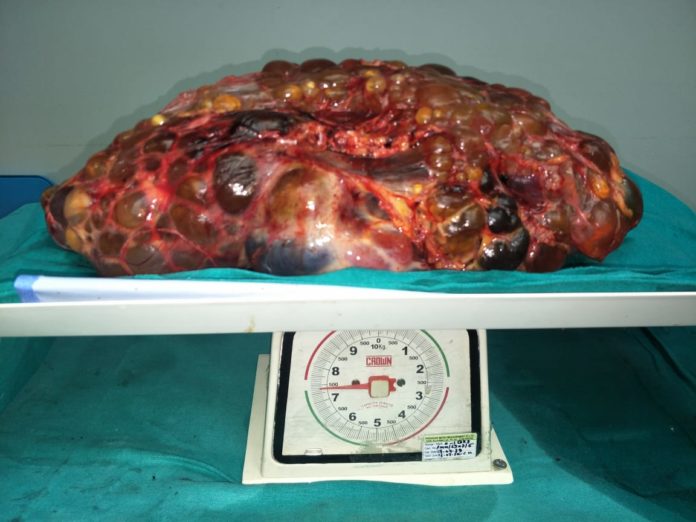 The patient, a 56 yr old man from Delhi, was suffering from a genetic disorder called Autosomal Dominant Polycystic Kidney Disease. Dr. Sachin Kathuria, Urology Consultant at Sir Ganga Ram Hospital, said “Polycystic Kidney Disease is a genetic condition in which fluid-filled cysts develop in both kidneys causing them to swell up and leading to renal failure. The concerned patient started having intolerable pain in his left flank associated with fever & breathing difficulty. We investigated and found that he had internal bleeding and infection within the cysts of his left kidney. It was at this point that we decided to take him up for surgery.” Because he did not respond to intravenous antibiotics and the shear mass was good enough to offer him such a procedure. 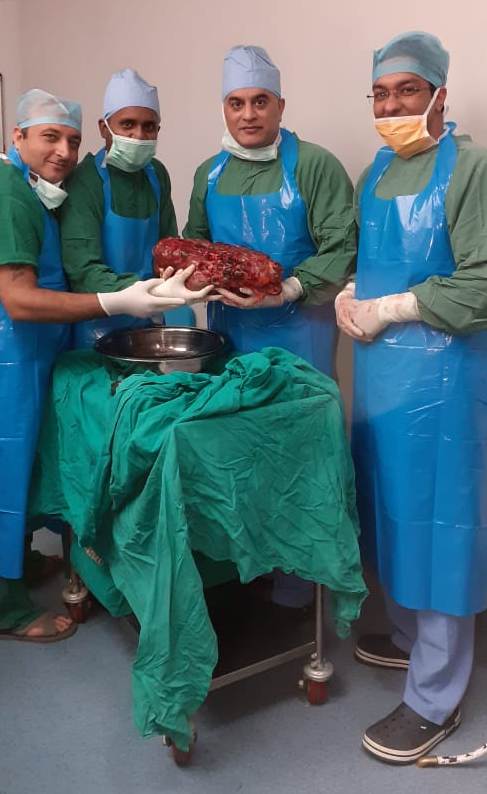 Dr. Sachin added “Although the pre-operative scans showed a huge kidney, we did not expect that it would be the heaviest. It had occupied almost the entire abdomen. To put things into perspective, the kidney weighed more than two human newborn babies combined!“. The patient has recovered well and has been discharged. He is presently on dialysis and awaiting renal transplant.

“We went through the medical literature and found two earlier reports of heavier kidneys removed, one 9 kg  (USA) and the other 8.7 kg (Netherlands). To our knowledge, this is the third heaviest kidney ever to be removed” says Dr. Sachin. Currently, the Guiness World Record for the heaviest kidney removed is held by doctors from Dubai Hospital, who removed a 4.25 kg kidney in 2017 from a patient suffering from Polycystic Kidney Disease. Doctors from Sir Gang Ram Hospital are planning to apply to the Guiness World Records in future.

Autosomal dominant polycystic kidney disease (ADPKD) is an inherited genetic systemic disease occurring in 1:700 to 1:1,000 individuals. It is a common inherited disorder with 12.5 million cases worldwide. The usual course of this disease is that they usually progress to renal failure and subsequently need renal replacement therapy in the form of dialysis and renal transplant. The indication of removing kidney in such patients is either infection, bleeding, renal tumour and palliation of symptoms.