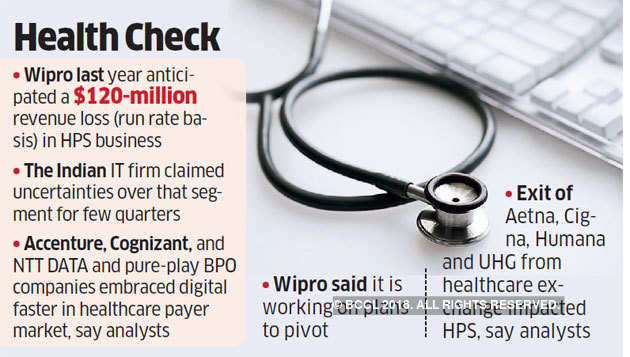 Indian IT services major Wipro may have to look at building solutions beyond healthcare enrolment-based services for its Health Plan Services unit to remain competitive amid legislative changes in the US, say analysts.

Wipro, the Bengaluru-headquartered software services exporter, acquired Florida-based HPS in early 2016 for $460 million. In July last year, Wipro chief executive Abidali Neemuchwala anticipated an annualised revenue loss of nearly $120 million in the HPS business based on the prior four quarters.

Wipro continued to remain cautious on HPS as ambiguity over changes in the coverage of the US’ Affordable Care Act, or Obamacare, persists

The Donald Trump-led US administration has pushed consistently to repeal Obamacare, which extended health insurance benefits to a large chunk of low-income people in the US.

At this juncture, Wipro should look “to double down quickly (to) address the re-pivot issues,” Peter Bendor-Samuel, chief executive of global IT advisory firm Everest Group, told ET.

“This will likely require significant investment in building capabilities that go beyond HPS’ enrolmentbased solutions and services. Areas such as care, claims, and network management represent good growth opportunity in the healthcare space,” said Bendor-Samuel.

But he warned that “this process will take time and likely lead to a further sub-par performance in the short to mid-range time frame. However, fully embracing the idea of adigital healthcare space that fully leverages digital technologies such as automation, analytics, and mobility is an attractive proposition.”
Wipro has to think beyond enrolment to keep HPS healthy, feel analysts
At the time of the HPS acquisition in February 2016, which was the election year for the US presidency, HPS was the market leader in the healthcare enrolment-based exchange business and still commands the single-largest share, according to analysts. Obamacare continues to be amajor source of revenue for HPS.

Wipro said it is presently working on pivoting the HPS business. “We are not waiting for (clarity on healthcare legislation) to get sorted, we are pivoting to some of the adjacent businesses. This is a political thing and it is very complicated,” Neemuchwala told ET in a recent interview.

“The need for a re-pivot has become dramatically apparent” with the loss of large key accounts such as Aetna, Cigna, Humana, and UHG, which have exited the healthcare exchange business, said Bendor-Samuel.

“These payers contributed significantly to HPS’ financials and their exit negatively impacted HPS, as the population covered by these carriers opted for alternate payers, some of which were not HPS’ clients. Although Wipro is moving to address the structural challenges in the business, its response has been slow and it was only late last year that HPS had thought of a few ideas and those lacked a strong marketing message,” said Bendor-Samuel.

Market analysts say the nature of HPS’ business, unlike other acquisitions, has higher fixed costs and it would eventually need restructuring. They expect further clarity on this during Wipro’s third-quarter results announcement.

“There is a margin impact because there is a lot of fixed costs. I think third quarter will give us a better sense,” said a Mumbai-based equity analyst who did not want to be named.