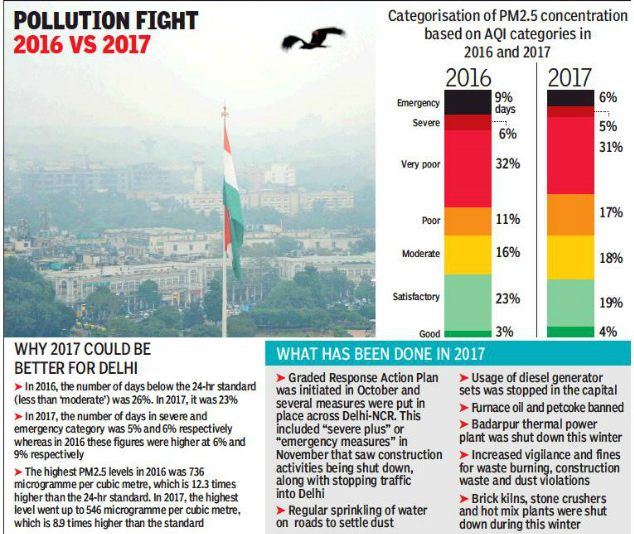 NEW DELHI: While Delhi’s air quality, according to the latest WHO database for 2016, is at its worst, pollution bodies and the environment ministry say it’s not a true reflection of the current reality because several measures and actions were taken in 2017, including implantation of the Graded Response Action Plan.

According to WHO’s database for 2016, Delhi was ranked at sixth position in the list. The average PM 2.5 levels were, however, recorded at 143 micrograms per cubic metre — the worst since 2010, when Delhi was ranked as the most polluted city in the world with an average concentration of 141 micrograms per cubic metre.
Without 2017 data, WHO pollution report doesn’t give clear picture
According to the Union environment ministry, the data for 2017 has shown an improvement since 2016 and 2018 so far has also fared better than 2016 — indicating cleaner air due to the efforts that were made in 2017.

According to the environment ministry, significant action was taken in Delhi-NCR in the past year, which included the formulation and implementation of Graded Response Action Plan, banning of pet-coke as fuel, strict surveillance of coal-fired plants, augmentation of air quality monitoring stations and formulation of a comprehensive action plan by the ministry of environment, which is further likely to bring an improvement in 2018.

Dipankar Saha, the former head of CPCB’s air laboratory, said that improvements took place in 2017 despite adverse meteorological conditions in that year. “The meteorological conditions, especially during winter in 2017, were much worse when compared with 2016. The air quality, however, showed an improvement due to strict implementation of GRAP and other measures on the ground,” Saha added.

CPCB officials said that AQI data for 2017 already showed improvements as compared with 2016, which is evident due to the work that has been put in. “There were more number of good, satisfactory and moderate days in 2017 than in 2016. The number of severe days also came down in 2017,” an official said.

Anumita Roy Chowdhury of CSE feels that while groundwork has been done in 2017, the focus needs to shift from one city to the national situation. “Urgent intervention is needed for implementing the National Clean Air Action Plan with a strong compliance strategy to meet clean air standards in all cities. It requires hard action,” said Chowdhury.