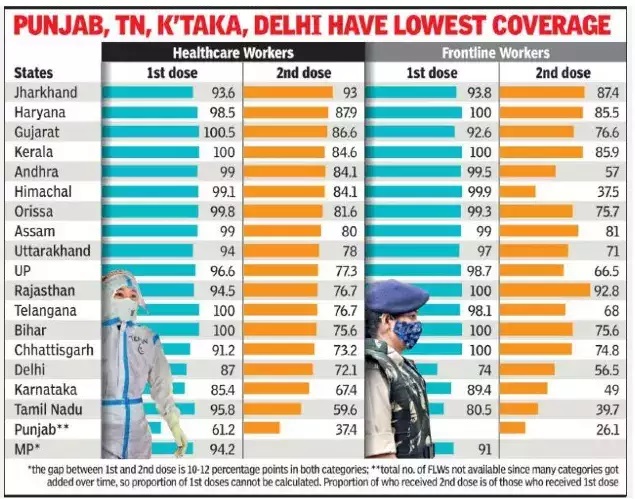 NEW DELHI : Healthcare workers and frontline workers were the very first priority groups identified when Covid vaccination started in mid-January, but more than seven months on, nearly one in five healthcare workers and over a quarter of frontline workers have not yet got their second shots, official data shows. A closer look shows widely differing coverage levels in states with Punjab, Tamil Nadu, Karnataka and Delhi having the lowest coverage.

In contrast, in Tamil Nadu barely 60% of healthcare workers and 40% of frontline workers have received the second dose.

“There was vaccine hesitancy and wastage in the first four months of the drive. With this, the allotment came down. Although allotments have increased, we still have a lot of backlog to clear. This can be set right only if we have on time allocation of 1 crore doses,” said Tamil Nadu health secretary J Radhakrishnan.

Surprisingly, Himachal Pradesh, which has been in the news for the highest overall Covid vaccination coverage in the country, had the lowest proportion of frontline workers who got the second dose, just 38% of the total 5.8 lakh registered. State health authorities said the gap between coverage of first and second dose was because of the waiting period between doses being increased. Similarly, barely 50% of frontline workers in Karnataka and 57% in Delhi have got the second shot.

Officials in Karnataka, where the proportion of healthcare workers who received the first dose was just 85%, claim they have problems with duplicate entries in the Cowin database of registered HCWs making the total numbers inflated. They claim that this is because doctors who are visiting consultants in many hospitals have been registered by various hospitals and nursing students who were graduating were registered by their colleges.

Rajasthan, Odisha, Gujarat and Assam have ensured high coverage of first and second dose among both priority groups. Although a smaller state, Goa too has a good record, having ensured 90% plus coverage for second shots in both groups.