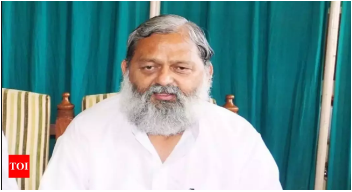 Chandigarh: As many as 194 government and private hospitals in Haryana have been empanelled for the Centre’s Ayushman Bharat Scheme, Health Minister Anil Vij said on Wednesday.

Vij said that Haryana is the first state to start this health insurance facility on a pilot basis from August 15. It will be implemented in one government hospital each in 22 districts of the state.

Prime Minister Narendra Modi will inaugurate the nationwide scheme on September 23 from Ranchi, wherein 10 crore poor and vulnerable families across the country, including 15.50 lakh families in Haryana, will be provided cashless coverage of up to Rs 5 lakh per family per year for secondary and tertiary care hospitalisation.

It will be the world’s largest government-funded healthcare programme.

The Health Minister said that the state’s people have started getting benefits under this scheme. So far, 35 persons have claimed aid under this scheme and 18 of them have already received the money, he claimed.

Similarly, 126 persons have been admitted to hospitals and 4,556 included in ‘Golden Record’ after their examination.

Vij also said that ‘Ayurveda Mitras’ are being deputed in state hospitals for assisting patients.

Besides, 22 District Nodal Officers and 22 District IT Managers have also been engaged for the scheme’s implementation.