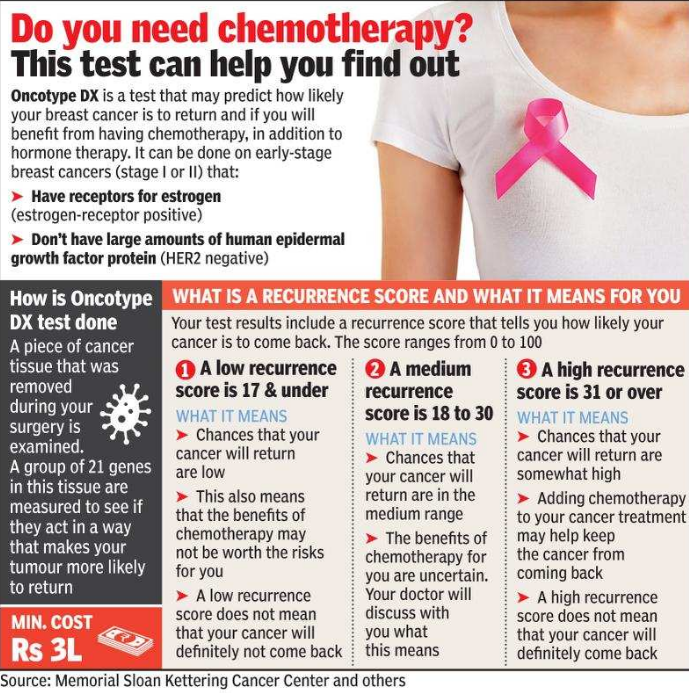 NEW DELHI: One out of every three breast cancer patients in India may be able to avoid chemotherapy if tests are available in India at reasonable cost to predict the risk of recurrence of the disease. These tests, of which Oncotype DX is the most validated one, are prohibitively expensive.

“Only about 5% of our patients are able to afford the Oncotype DX test. It costs around Rs 3 lakh,” Dr S V S Deo, professor and head of surgical oncology at AIIMS, said. “For the rest, we use our clinical assessment to decide if they need chemotherapy or not,” he added. Even in the private sector, only about 20% of patients are able to afford such tests, said Dr P K Julka, senior director, Max Daycare Oncology Centre. Oncotype DX has been available abroad for nearly a decade. It can predict the risk of recurrence on a scale of 0 to 100 by assessing 21 genes associated with the disease.

It has been known for long that women who fall between 0 and 10 have a very low risk of recurrence and those who fall between 26 and 100 are at high risk. But there was no consensus on risk of recurrence for those falling in between these two categories — those who got from 11 to 25. A recent research published in The New England Journal of Medicine, that was supported by US’ National Cancer Institute, has validated that women falling in the 11-25 score group are also at low risk for recurrence and may not need chemotherapy.

Most breast cancer patients, nearly 70% of them, fall in this category and experts abroad said they will benefit from the findings. However, in India, doctors said even if the tests were available, not more than 30-35% patients would be a candidate for the testing. “Nearly 50% of patients are diagnosed for breast cancer in advanced stages in India. Among the remaining half, 30-35% may require undergoing Oncotype DX test to predict risk of recurrence and chemotherapy need,” Dr Deo said.

In the US and other developed nations, most patients are diagnosed with breast cancer at early stages and, therefore, they can benefit more from such tests.

For the Oncotype DX test, doctors take out a sample of the cancer tissue during surgery. This sample is sent to the lab where 21 genes associated with the disease are assessed to predict the risk of recurrence. Sources said AIIMS was in talks with the company that owned the patent for Oncotype DX to allow it to acquire the technology at a cheaper rate so patients could benefit.

A cycle of chemotherapy costs anywhere between Rs 20,000 and Rs 30,000 in private hospitals. Breast cancer patients are usually prescribed eight to nine cycles, which cost them about Rs 1.6 lakh to Rs 2.7 lakh, in addition to the cost of surgery and hormone therapy.

Dr Vinod Raina, director of medical oncology at Fortis Memorial Research Institute in Gurgaon, said the applicability of gene test is lesser in India due to delayed diagnosis. “However, it will good if even 30% or more patients who fall in the category can benefit from the testing that clears them of the need for chemotherapy and the risk of recurrence,” he said. Apart from high costs, chemotherapy causes side-effects such as hair loss, general weakness and lower immunity among others.