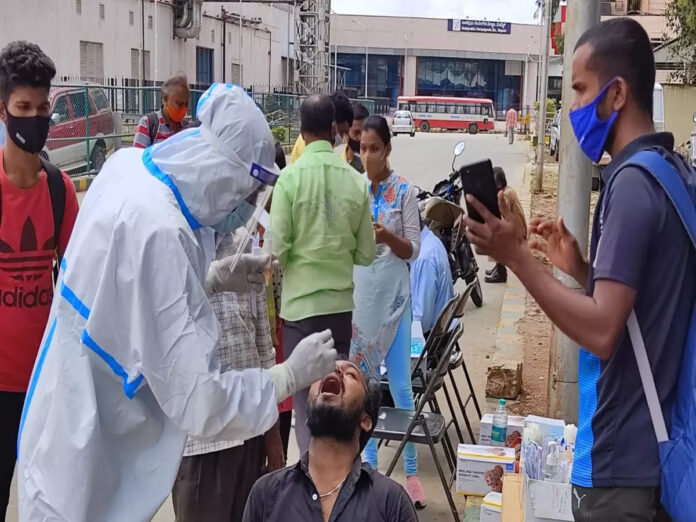 BENGALURU: The stigma of having his home sealed was more painful than the disease itself, says the 46-year-old doctor, one of the two patients in India infected with Omicron. He dispelled fears on the new coronavirus variant, saying the first thing he told himself once the symptoms manifested was to stay calm, get tested immediately, self-isolate and seek treatment. His wife and children too quarantined themselves at home.

The doctor is now “absolutely fine” but is still in isolation at a hospital in Bengaluru as a precautionary measure. He told TOI that his symptoms included severe body ache, chills and a mild fever, but stressed he had no breathing difficulties and his oxygen saturation level was normal throughout.

The body pain [myalgia] and mild fever began on the night of November 21. He gave swab samples for RAT and RT-PCR test at his hospital lab the next day. Both showed he had Covid-19.

“I did not have a cold, cough or any breathing difficulty,” the doctor said. “The fever was at a maximum 100 degrees Fahrenheit.”

Three days into home isolation, he experienced spells of dizziness, and with concern growing among his family, decided to get admitted in a private hospital. While his oxygen saturation level was 95, the fever had gone up to 101 degrees. An HRCT scan showed very minimal changes in the lungs, which is typical in a Covid patient with 3-4 days infection.

“I was given a dose of monoclonal antibodies on November 25 and that made a lot of difference,” he said. “The next morning, I was absolutely normal with zero symptoms. I felt as though I had never had Covid at all.” A few days ago, virologists had apprehended that Omicron may not respond to monoclonal antibody therapy, also known as the cocktail treatment.

While the doctor was in hospital, his wife, also a doctor, began showing the same symptoms, including body pain and chills on November 26. She tested positive for Covid the same day. The couple’s elder daughter was RAT positive, but she and her sister were later found RT-PCR negative. The doctor was discharged on November 29.

“Today (December 3) is the 12th day since the first symptoms showed up. I have no symptoms now,” said the doctor, who was re-admitted to a designated hospital on Thursday after it was confirmed that he had been infected by the Omicron variant. His wife and children too are in the same hospital.

The doctor said his younger daughter, aged five, thought they were going on a picnic when they were taken to the designated hospital, and had happily packed her books and bag. “The children may be exposed but they are asymptomatic and negative for Covid,” he said.

Genomic sequencing reports of the doctor’s five positive contacts, including his wife, are pending. On Wednesday, the Bruhat Bengaluru Mahanagara Palike (BBMP) conducted tests on the doctor’s extended family, including his parents and brother’s family who live in the same building.

“I feel Omicron is already in the community,” the doctor said. “I just happened to be the first to be detected with it. I don’t know where I picked it up. We don’t know much about Omicron but going by my experience over the past 12 days, it does not seem serious and does not call for worry. However, one must remain cautious. Some people may require hospitalisation but it is not life-threatening.”

The doctor couple said the infection may not have been severe since they are fully vaccinated. “One must follow precautions like using a mask and sanitising hands despite being vaccinated. Those who haven’t taken the shot must first get themselves vaccinated,” the doctor said, a point stressed by his wife too.

They said their house being sealed was a bigger concern, especially since there are elderly people at home. “The stigma hurts more than Covid but we must follow government protocol. Our children can only attend online classes and their school authorities are aware of us testing positive,” he said.