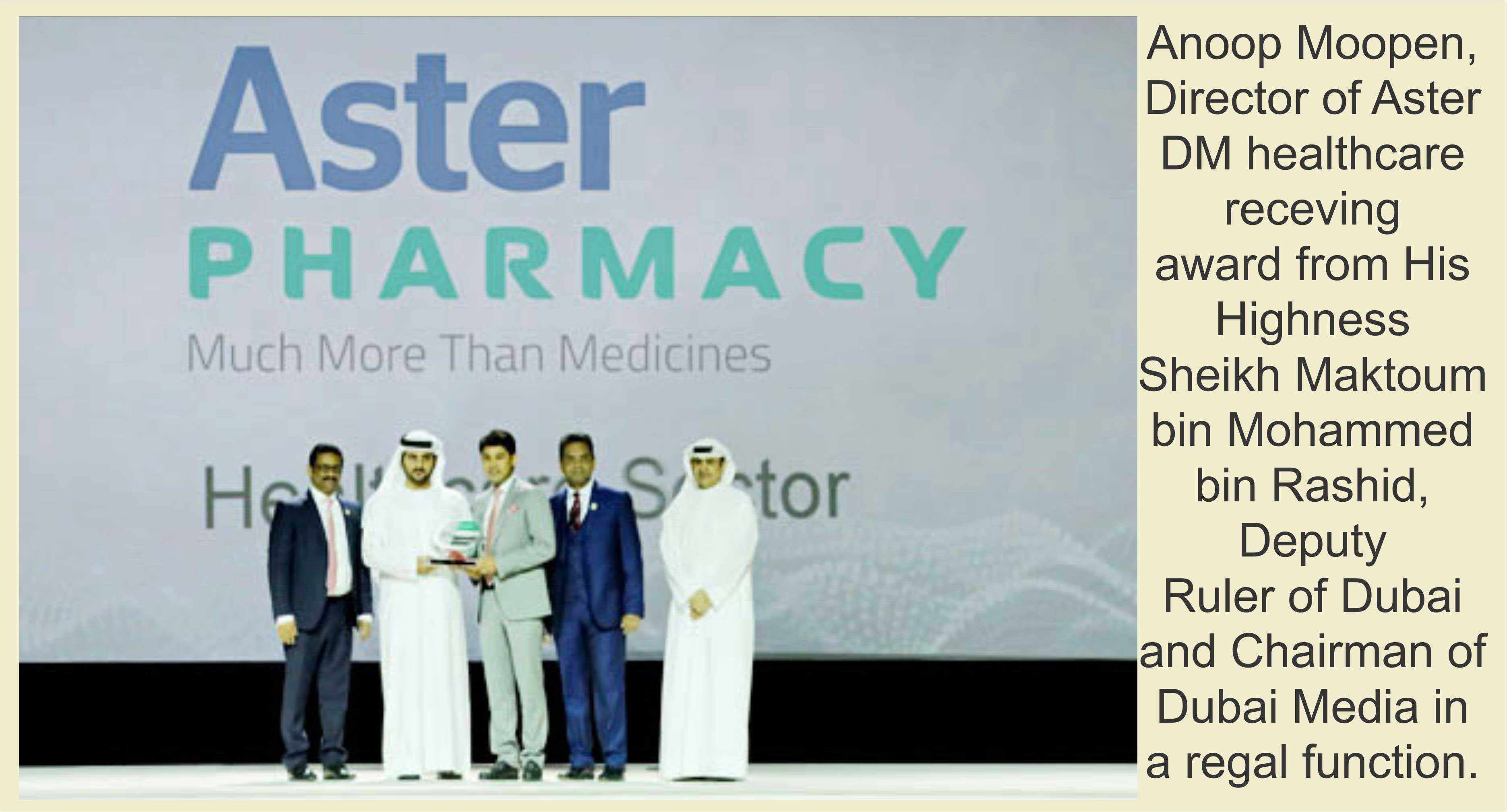 Got Coveted Dubai Quality Appreciation Award (DQAA) on May 3

New Delhi/ Dubai: Aster Pharmacy is creating its own ‘Burj Khalifa’ of excellence in the healthcare world. It added one more feather of high on its cap by bagging coveted Dubai Quality Appreciation Award (DQAA) in Dubai World Trade Centre On May 03, 2017. Aster Pharmacy, one of the most decorated of pharmacies world over, is shining seamlessly through years of its existence, thanks to its untiring quest for perfection in quality services.

The award was handed to Anoop Moopen, Director of Aster DM healthcare by His Highness Sheikh Maktoum bin Mohammed bin Rashid, Deputy Ruler of Dubai and Chairman of Dubai Media in a regal function.

Talking to Medicare News in Delhi from Dubai on phone, Mr. Jobilal, CEO and Assistant Vice-President of Aster Pharmacy vertical expressed his happiness on receiving such a coveted award.

Mr. Anoop Moopen, Director of Aster DM Healthcare, said, ‘This highly desired award measures and recognizes businesses that encourage the development of the UAE’s economy. We streamlined our operations to create a high level competitive business environment that fosters trade, business development, and job creation, which ultimately contributes to a solid and sustainable growth of the GCC economies.’

Mr. Jobilal said, ‘Aster Pharmacy was considered for the award for demonstrating the best business practices in the UAE and throughout the GCC region. To be qualified for the award, Aster Pharmacy underwent comprehensive assessments and a jury review. We have been implementing radical changes in Aster Pharmacy’s organizational structure and functioning in terms of leadership, workforce, talent management, customers, strategies, operations management, social responsibilities and innovations.’

Looking at Aster Pharmacy’s journey from its inception, it is crystal clear that it has never rested on its laurels and kept pursuing excellence ever. It is evidenced by awards and honours piling up on it every passing year.
Aster Pharmacy, a division of Aster DM Healthcare, has been honoured for its outstanding performance and won the Dubai Quality Appreciation Award (DQAA) during the 2016 cycle at the Most Prestigious Dubai Business Excellence Award 2017 ceremony constituted by Dubai Economy.This coveted award recognizes exceptional business performance that contributes to the economic development of the Gulf Cooperation Council (GCC) region.

The Dubai Business Excellence Awards is annually held under the patronage of His Highness Sheikh Mohammed Bin Rashid Al Maktoum, UAE Vice-President, Prime Minister and Ruler of Dubai. Since its inception, the Award is considered as one of the highest recognitions in the region for attaining business excellence. It has recognized the winners of four awards on the same day – Dubai Service Excellence Scheme, Dubai Human Development Award, Global Islamic Business Award and Dubai Quality Award, as well as celebrating 23 years in this excellence journey.

Aster Pharmacy has won numerous awards and accolades including the Dubai Service Excellence scheme recognition as the best pharmacy in the UAE for 4 times over the last 6 years, and the prestigious Mohammed bin Rashid Al Maktoum Business Award (MRM Award) constituted by Dubai Chamber of Commerce in 2015.

Aster Pharmacy showcases many products and services to customers, in addition to educating the masses about the importance of a healthy lifestyle and safe medication. The organization has undertaken several initiatives of social education and customer awareness programmes. These programmes aim to educate the community about the basic routines to be adopted for a healthier life, which is a promise that Aster Pharmacy outlets offer along with its ‘much more than medicines’ philosophy.