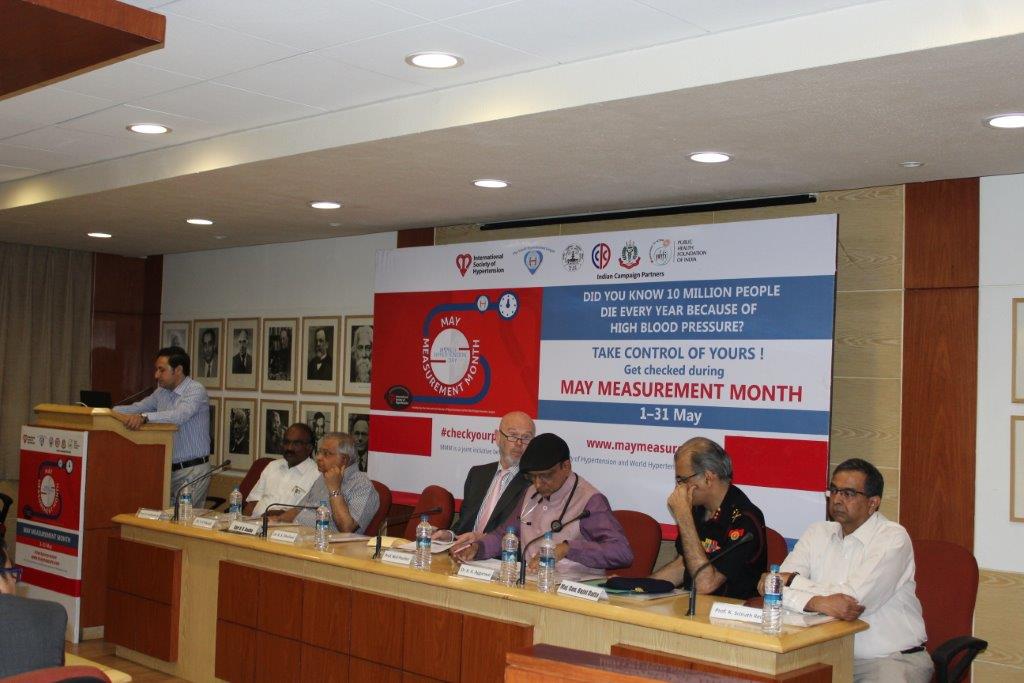 Biggest ever Blood Pressure Screening in India in May

New Delhi: High Blood pressure (Hypertension) is making mayhem in India. It has become the biggest single contributing risk factor to death and the burden of disease in the country.

India being part of an initiative, named MMM (May Measurement Month), to globally measure this epidemic, the country would know the enormity of this killer condition in tangible terms at the end of May. In India alone, blood pressure of 25 lakh individuals would be measured in. The initiative was launched on May Day under the aegis of Public Health Foundation of India (PHFI). PHFI chairman Dr. Shrinath Reddy said- It is high time to tame the blood coursing through our bodies to avert the catastrophe. The initiative will go a long way to towards this end.

This global initiative will be done in 100 countries simultaneously in the month of May, which aims to screen 25 million individuals, under the aegis of International Society of Hypertension (ISH) and the World Hypertension League (WHL). Indian Council for Medical Research along with Public Health Foundation of India (PHFI) has joined this initiative to raise awareness of blood pressure screening.

The drive will be conducted at 500 sites across India aiming to measure 25 lakh people that will contribute to the global cross-sectional survey of men and women aged between ≥18 to 65, who have not had their BP measured ever, or since 30 April 2016. Key partners in India are All India Institute of Medical Sciences, Indian Medical Association, Army Medical Corps, and Association of Physicians of India & Industry too.

Recognizing that raised blood pressure or Hypertension is the biggest single contributing risk factor to death and the burden of disease worldwide, Indian Council for Medical Research- Government of India, along with Public Health Foundation of India, All India Institute of Medical Sciences, Indian Medical Association, Army Medical Corps, Association of Physicians of India & Industry launch the May Measurement Month (MMM) 2017 global initiative to raise awareness of the importance of Blood Pressure screening to tackle this global epidemic. This global initiative will be done in 100 countries simultaneously in the month of May, which aims to screen 25 million individuals, under the aegis of International Society of Hypertension (ISH) and the World Hypertension League (WHL). In India, the drive will be conducted at 500 sites across the country aiming to measure 2.5 million people that will contribute to the global cross-sectional survey of men and women aged ≥18 to 65, who have not had their BP measured ever, or since 30 April 2016.

Hypertension has long been recognized as one of the major risk factors for cardiovascular disease and premature deaths worldwide, and is one of the most common lifestyle ‘Silent Killer’ diseases today, with every third person having suffered from it. International data suggest that fewer than half of those with hypertension are aware of their condition. Raised blood pressure — hypertension — causes approximately 9.4 million deaths each year worldwide, and many of those who die never knew they were affected. There are no symptoms and some only find out after suffering a heart attack or stroke, or are diagnosed with something else, such as heart or kidney disease. In India, it exerts substantial public health burden on cardiovascular health status and the health care system. Hypertension is estimated to account for 10.8% of all the deaths and 4.6% of DALYs in the country. The adult Hypertension prevalence has shown a drastic increase in the past three decades in urban as well as rural areas. It is estimated that 16% of Ischaemic Heart Disease, 21% of Peripheral Vascular Disease, 24% of Acute Myocardial Infarctions and 29% of strokes are attributed to hypertension.

Hypertension or High blood pressure (BP) is a major public health problem in India and its prevalence is rapidly increasing among both urban and rural populations. 2.6 lakh Indians die in India due to hypertension. In fact, hypertension is now the most prevalent chronic disease in India. This stresses the need for its effective management and control and it highlights the huge impact it can have on the burden of Cardiovascular Diseases.

Prof. Neil Poulter, President of the International Society for Hypertension (ISH) said, ‘Raised blood pressure is the biggest single contributing risk factor for global death and the worldwide burden of disease, and we want May Measurement Month to lay strong foundations for significantly increasing public understanding. The goal for May Measurement Month is therefore to screen as many people as possible worldwide who have not had their blood pressure measured in the previous year.’

In her message, Dr Soumya Swaminathan, Director General, Indian Council of Medical Research said, ‘It’s a wonderful initiative that we at ICMR are undertaking together with PHFI, global partners like ISH and WHL and a host of other key Indian partners, to raise awareness on blood pressure measurement. It is a well-known fact that early detection of Hypertension can delay NCDs and improve the quality of life. Through this initiative we not only aim to raise awareness of public in general, but also inculcate regular BP monitoring amongst physicians, in addition to developing better policy and guidelines to tackle hypertension and NCDs in India.’

Prof D Prabhakaran, Vice President, Research and Policy, at PHFI said, ‘High blood pressure (BP) or Hypertension is ranked as the third most important risk factor for attributable burden of disease in south Asia and exerts a substantial public health burden on cardiovascular health status and healthcare systems in India. But in addition to the burden of known Hypertension, undiagnosed hypertension too continues to be a global burden on society, governments, health care professionals and individuals. With an aim to make an impact in hypertension and highlight the need for increased screening for raised BP, PHFI commits itself to partner with the Government of India and the campaign organizers to raise public awareness on raised BP and provide us all with better blood pressure screening facilities and treatment.’ Dr. K.K. Aggarwal, President, Indian Medical Association (IMA) also stressed the need inculcate habit getting blood pressure measured regularly.

The May Measurement Month global Campaign aims to measure millions of people’s blood pressure to find out just how big the problem is and demonstrate to governments across the world why they need to raise public awareness and provide us all with better blood pressure screening facilities and treatment. During the 1 to 31 May 2017, the ISH and WDL together with volunteering countries, governments, and municipal corporations will be working to screen 25 million people. The project is conducted in accordance with all national and international ethics guidelines. The data from each country will be analyzed along with the results of millions of others worldwide. The results will be announced once the analysis in complete to form a blue-print action plan to tackle Hypertension globally.

Raised blood pressure (hypertension) is the cause of many cardiovascular conditions, including stroke, heart attack, kidney failure and dementia. The huge amount of data collected during MMM17 will be used firstly to highlight to the public the importance of knowing blood pressure numbers, and secondly to motivate governments to improve local screening facilities and policies, so reducing the global burden of hypertension.

The aetiology of raised blood pressure is largely explicable by identified environmental factors such as overweight, excessive intake of alcohol and dietary salt and insufficient exercise.

Several drug classes have been shown to provide cost-effective blood pressure lowering for the prevention of the adverse cardiovascular sequelae of raised blood pressure. Despite the availability of these antihypertensive medications, global data suggests that fewer than half of those classified as hypertensive are aware of their problem.

Among those who are treated for hypertension, fewer than one third has their blood pressure controlled to currently recommended targets.