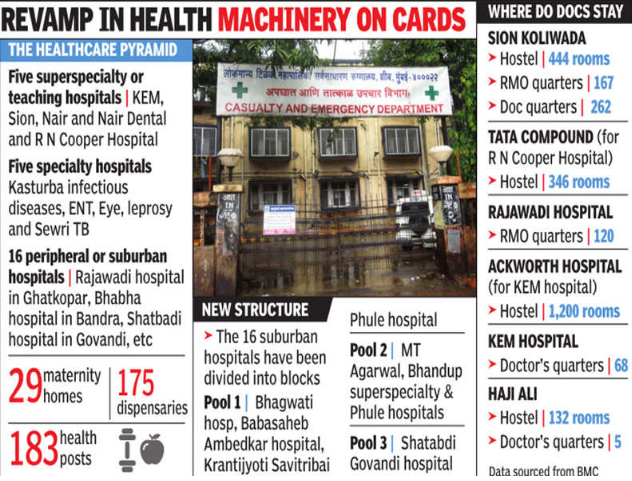 MUMBAI:Considering that housing is the most vexed and, hence, the most sought-after issue in Mumbai, civic authorities are holding it out as a tantalizing carrot to rope in doctors into its healthcare system.

As a part of a major revamp of its healthcare machinery, especially in the suburban areas, the BMC is in midst of building hostels and quarters for its students, resident doctors and senior consultants in some of the better areas such as Parel, Haji Ali Sion, Andheri and Goregaon, to name a few. Almost 400 quarters will come up for senior doctors in Parel and Sion Koliwada, while around 2,000 hostel rooms will come up across the city for its student doctors.

Municipal commissioner Ajoy Mehta said super-speciality doctors, especially cardiologists and nephrologists, are in short supply. The BMC has earmarked Rs 1,000 crore for various civil works alone. “We have earmarked Rs 441 crore to develop Bhagwati Hospital in Borivli, another Rs 345 crore for M T Agarwal in Mulund and Rs 382 crore for Shatabadi Hospital in Govandi,” he said.

Housing is only one of the new incentives that the BMC has used in recent times to lure doctors. Two years ago, it offered a flat consultancy fee of Rs 75,000 to young doctors ready to join its suburban hospitals. The offer didn’t find many takers. The BMC has an exhaustive hospital network comprising super-specialty hubs with 1,4002,000 beds as well as 16 smaller hospitals spread out across the suburbs. The suburban hospitals have a problem with retaining human resources, admitted a senior civic official. In fact, few of the suburban hospitals have no super-specialists for heart or ortho-care. “A road traffic victim from Malad or Vikhroli should ideally be taken to the nearest civic hospital at Goregaon or Ghatkopar, but ends up being taken to Sion Hospital or KEM Hospital in Parel because of lack of experienced doctors,” said the official. The load on the BMC’s teaching hospitals located in south Mumbai is thus immense. “Our studies and surveys have shown that patients with cold and cough too go all the way to south Mumbai, instead of the civic hospital closest to their home,” said a senior doctor.

In this backdrop, a high-ranking team, led by Mehta, sat down to rework BMC’s healthcare pyramid, that also includes dispensaries and primary healthcare centres. In the new plan, BMC has clubbed together hospitals that are within a radius of a few kilometres into blocks. “The idea is to share super-specialties,” said Dr Avinash Supe, who is the director of BMC’s hospitals.

This would mean each block of hospitals will have a complete set of super specialists. If a gastroenterologist is available in, say Cooper Hospital in Andheri, it is likely that Siddharth Hospital in Goregaon wouldn’t have one. “We will only club hospitals that are within 1-3 km range of each other,” added Dr Supe.

A senior official warned that while construction was easy, running a super-speciality hospital was a challenge. “The BMC built the trauma care centre at Jogeshwari abutting the Western Express Highway at a huge cost. It now serves more as a maternity hospital than a centre for treating accident cases,” said the official.