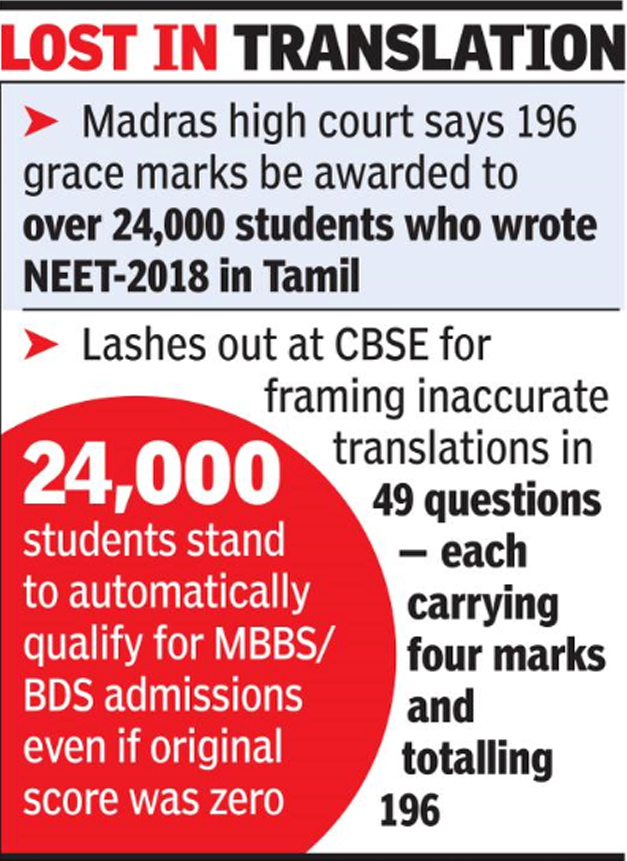 MADURAI: In a ruling that will disrupt ongoing MBBS and BDS admissions, the Madras high court has ordered that 196 “grace marks” be awarded to more than 24,000 students who wrote the NEET-2018 in Tamil for MBBS admissions. The court stayed ongoing MBBS admissions and gave CBSE two weeks to come up with a fresh list of candidates.

Lambasting CBSE for framing inaccurate and wrong translations in 49 questions, each carrying four marks and totalling 196, a division bench of Justice C T Selvam and Justice A M Basheer Ahmed said: “The list of qualified candidates shall be kept in abeyance, as would the counselling, pending publishing details of the qualified candidates afresh.”

The order divided parents and students. While more than 24,000 students who wrote the exam in Tamil were excited as almost all of them will now automatically qualify for MBBS/BDS admissions even if their original score was zero, or even -100, smiles fell off the faces of those who had already bagged seats.

My son spent a year after Class 12 studying hard to get a high score. It would be unfair to snatch the seat that was given to him,” said S Maheshwari, whose son has been placed in a government medical college.

On the contrary, E Manikantan, a parent, said: “There is some justice finally. Our son wrote the exam in Tamil and had scored 182. But he was unable to get an MBBS seat as the cut-off for the BC category in all colleges in state counselling was 344. Now, with 378 marks, he will get a seat in a government college.”

Others awaiting the second round of counselling, both state and AIQ, also fear this will scuttle their chances of getting placed in a medical or dental college.

The Madurai bench of the Madras high court was passing orders on a PIL filed by CPM MP T K Rangarajan who claimed there were translation errors in the Tamil NEET question paper and sought grace marks for all the students. For instance, the word “cheetah” was translated literally as “Seetha” while technical words like “multiple allele” and “ureter” were translated incorrectly, he said.