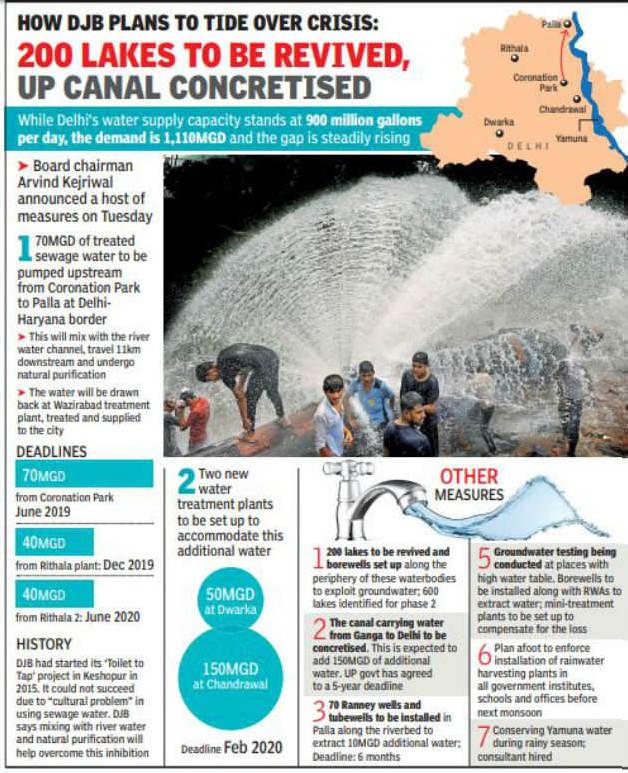 NEW DELHI: Would you want to drink water that was once flushed down the toilet? Repugnant as it may seem, it’s an idea whose time has come. Driven by water shortages, disputes with Haryana and the prospect of rejuvenating the Yamuna, Delhi government has finally decided that it will use treated sewage water to augment the city’s water supply on a large scale.

While inspecting construction work at Asia’s largest sewage treatment plant at Coronation Park in north Delhi on Tuesday, CM Arvind Kejriwal announced that the city will start following the ‘Singapore new water policy’ by using waste water to augment 15 to 20% of its water supply within next two years.

“DJB has an installed water capacity of 900mgd (million gallons per day) and we will start using 70mgd water from Coronation Park treatment plant by June next year as a start,” Kejriwal said.

Treated sewage water will be pumped upstream to Palla near the Delhi-Haryana border, where it will mix with river water channel, travel 11km downstream undergoing natural purification. “Water will be drawn back at Wazirabad and treated again for re-use as ‘new water’. In the second phase, 40mgd water will be diverted from Rithala by December 2019 and another 40mgd by June 2020. It will be an overall improvement of 150mgd,” he added.

Consultants have already been hired to make plans for utilising 605mgd coming from 36 sewage treatment plants. DJB estimates that it can produce at least 200mgd of additional water which can be put back into Yamuna. Plans are afoot to improve the water supply by 50% in five years, the CM said. Two new water treatment plants at Dwarka (50mgd) and Chandrawal (140mgd) have been approved to accommodate this “new water” by February 2020.

In 2015, DJB had started a “Toilet to Tap” project in Keshopur. “It could not succeed due to a ‘cultural problem’ in using sewage water,” Kejriwal said. DJB expects that by putting the treated water in the river, where it’ll be purified naturally, will help overcome this inhibition.

The CM also announced a plan to rejuvenate 200 lakes. “Borewells will be set up along the periphery of these lakes to exploit the increase in groundwater levels. Landscaping around the water bodies is also planned. The water will percolate to the ground and improve the groundwater levels in the vicinity,” he said.

Groundwater quality testing will be carried out at places where the water table is very high and sets of borewells will be installed with the cooperation of RWAs to extract water at positive locations. Mini-treatment plants would be set up to compensate the loss,” DJB vicechairman Dinesh Mohaniya said.

Delhi government has announced that the Gangnahar canal carrying Ganga water from UP will be concretised to save seepage of water. “UP government has agreed to supply the additional water saved by the contretising the canal to Delhi. We estimate around 150mgd will be added by this measure but UP government has asked us to appoint a consultant for better estimates,” Kejriwal said.

Jyoti Sharma, a water expert from an NGO, Force, felt that DJB would face many problems when they actually start implementing the project. “Carrying water against the slope would be an expensive affair. If norms regarding the output water are followed and they are able to implement it, hats off to them,” she said. Meanwhile, Delhi BJP and Congress slammed the AAP government for “making false promises”. While DPCC president Ajay Maken said it would take at least five years to improve the water situation in Delhi, Delhi BJP chief Manoj Tiwari said people felt let down by the CM.