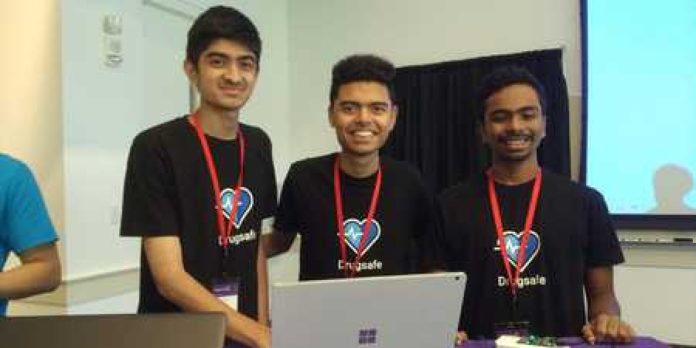 The most growing global issue is the market of fake medicines and people don’t have any way to check their fakeness. To help people in verifying the authenticity of medicines, Students from RVC College of Engineering, Bengaluru designed a mobile app to detect counterfeit drug. ANd the best part is that they won the cash price if $15,000 for this innovative app designing under the Big Data category at the Microsoft Imagine Cup world championship, 2018 edition held in Redmond, US.

Students named their team “DrugSafe” and they won cash prize along with two other teams from Nepal and the US and USD 30,000 Azure grant to help further its endeavor.

DrugSafe team member names are Chidroop, Pratik Mohapatra, and Srihari HS, students of RVC Engineering College, Bengaluru. The team aims to find the best possible technical solution to address the big issue of counterfeit drugs globally with allowing people to check the originality of the medicines.

Drug Safe represented India at the global finals of the Microsoft Imagine Cup world championship and made India proud on them. Now, the question is how the app verifies the originality. App has Optical Character Recognition (OCR) system to identify minute details in the design and packaging of medicines and compare all with the original manufacturer’s patented and trademarked attributes. Then after three level of testing, discrepancies are highlighted to help users to identify medicines’ originality.

The Canadian team won the overall Microsoft Imagine Cup 2018 for their team project “smartARM”, this is a functional robotic prosthetic hand, powered by Microsoft Azure. smartARM is equipped with an embedded camera in the palm to help recognize objects and calculate the most appropriate grip for the object. The winner rewarded with the USD 85,000 cash prize, an Azure grant worth USD 50,000 along with a mentoring session with Microsoft CEO Satya Nadella.

49 teams were selected from 33 countries this year to travel to Microsoft headquarters in Redmond to showcase their innovative solutions. And the second prize winner Team iCry2Talk is from Greece presented a project which enables parents to decipher the message behind a baby’s crying in real-time. The project costs a little and makes use of a non-invasive intelligent technology that matches the cries with specific physiological and psychological states, depicting the results in a text, image, and a voice message.

Third place winner is from Japan, and the team presented the project Mediated Ear, this is very useful software for hearing-impaired individuals. This software allows focussing on a specific speaker among a multitude of conversations through the help of deep learning.

Microsoft Imagine Cup competitions are held every year since 2003 and have seen engagement from nearly 1.8 million students from over 190 countries till now.