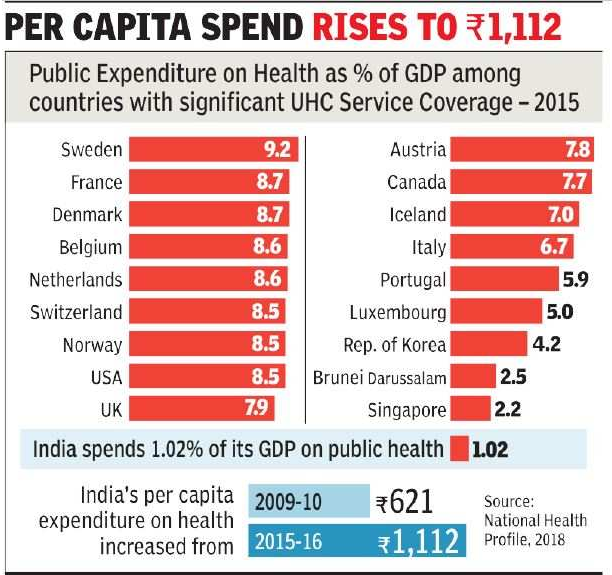 NEW DELHI: India currently spends a little over 1% of GDP on health, far below Singapore which has the lowest public spend on health at 2.2% of GDP among countries with significant universal health coverage (UHC) service, according latest National Health Profile (NHP) data.

India’s health spend just over 1% of GDP
But this could change as the centre plans to launch its ambitious National Health Protection Schem (NHPS)- Ayushman Bharat – to cover over 10 crore poor families with an annual health cover of Rs 5 lakh per family. Modicare, as it is called, is billed to be the world’s largest such government-run insurance scheme.

According to NHP (2018), around 43 crore individuals or 34% of the population were covered under any health insurance in 2016-17. Launching the NHP, health minister JP Nadda said NHPS will significantly bring down the out of pocket expenditure on health.

Though the latest NHP data do not give figures for ‘out of pocket’ expenditure, WHO’s health financing profile for 2017 shows 67.78% of total expenditure on health in India was paid out of pocket. The world average is 18.2%.