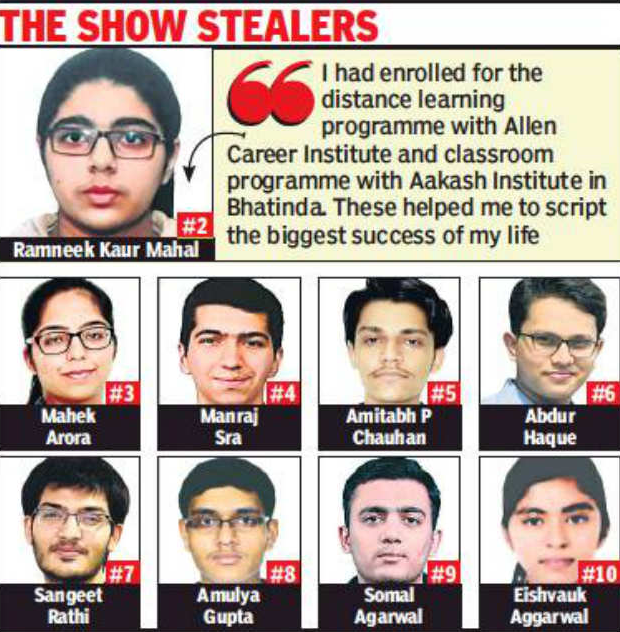 JAIPUR: Kota repeated its success story by securing nine ranks in the top 10 when All India Institute of Medical Science (AIIMS) entrance results were announced on Monday. Kota claimed all positions in the top 10 except the All India Rank 1 (AIR-1) which went to Eliza Bansal of Punjab. Last year, all the top 10 ranks were from one coaching institute in Kota.

9 out of 10 AIIMS toppers from Kota, girls secure top 3 ranks

No student from south India featured in top 10

The next four ranks, Amitabh P Chauhan (5) of Gujarat, Abdur Haque (6) of Uttar Pradesh, Sangeet Rathi (7) of Haryana and Amulya Gupta (8) of Delhi—scored 99.9989 percentile. The rankings are given on the basis of subject-wise scores. Of the top 10, Ramneek Kaur Mahal (2), Manraj Sra (4) and Eishvauk Aggarwal (10) prepared via distance learning programme from Kota.

The major surprise came from Punjab and Haryana which had three students each in the top 10 for the first time followed by one each from Rajasthan, Gujarat, Uttar Pradesh and Delhi. This year none of the students from south India made it the top 10, surprising experts. Allen Career Institute of Kota claimed to have coached all the nine students in the top 10.

Ramneek Kaur Mahal from Bhatinda, who came AIR-10 in NEET exam and AIR-2 in AIIMS, said, “I had enrolled for the distance learning program with Allen Career Institute and classroom programme with Aakash Institute in Bhatinda. These helped me to script the biggest success of my life.”

She is happy to see three students from Punjab in the top 10. “This is a very unusual result for Punjab. It will motivate thousands of students to contest the toughest and the most prestigious exam in the country,” said Mahal. She would like become a successful neurophysician and AIIMS-Delhi is her obvious choice like other toppers.

Coming from a state struggling with its skewed sex ratio, Mahek Arora (3) from Panchkula in Haryana says that family support neutralised societal norms. “I lost my father in 2012. My mother supported the idea of going to Kota for studies. I would like to appeal to my state and my countrymen to treat daughters equally,” said Arora, who came AIR-31in NEET.

Kota institutes had 34 students in the top 50. They claimed that 60% of those who got admissions in AIIMS-Delhi’s over the last 10 years had a Kota connection. They were either those who studied in Kota or prepared for the exam through the distance education mode.