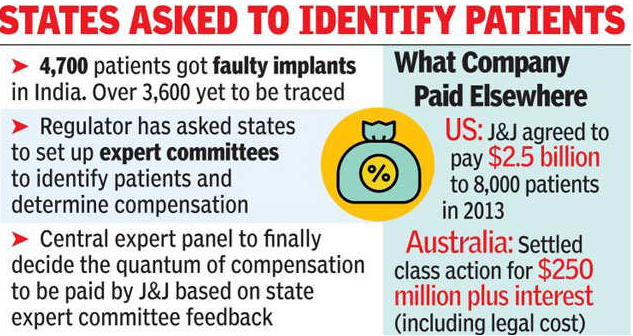 NEW DELHI: In a decision that will offer relief to patients suffering from Johnson & Johnson’s faulty hip implants, the Indian drug regulator has asked the global health major to pay Rs 20 lakh as interim compensation to all those who had received the implants, in keeping with recommendations made by a government-appointed committee.

The sum of Rs 20 lakh will be base compensation to all such patients, the Central Drugs Standard Control Organisation (CDSCO) has said in a letter it sent on Tuesday to J&J. This in compliance with recommendations of a panel headed by Dr Arun Agarwal, former dean of Maulana Azad Medical College.

All patients who got the implants will be evaluated individually to gauge the extent of medical problems arising from the bad implants and the compensation enhanced accordingly, CDSCO said.

J&J told to pay Rs 20 lakh to each recipient of faulty hip implant
The company has informed the regulator that around 4,700 patients in India received such implants but over 3,600 patients are yet to be traced.

Apart from the immediate compensation, the regulator has also asked the multinational pharmaceutical company to extend its medical management programme along with reimbursement of medical costs till 2025, as the average life of an orthopaedic implant is 15 years. The company had terminated its programme for affected patients last year.

Drug regulator will ask J&J to comply with panel suggestions

J&J had initiated a global recall of its ASR hip implant in 2010. The company stopped its reimbursement programme for affected patients in August 2017. In the US, J&J had agreed to pay $2.5 billion to 8,000 patients in 2013 for the faulty implants.

“Coming after unconscionable delay by CDSCO, we hope the compensation mechanism is enforceable. It remains to be seen whether compensation will be ‘just compensation’ as recommended by the expert committee,” said Vijay Vojhala, one of the patients who suffered disability due to faulty implants.

A senior CDSCO official told TOI that the regulator will ask the company to comply with the recommendations of the committee. “We have also written to state authorities to immediately set up expert committees which can evaluate individual cases and recommend compensation. Once these recommendations are approved by the central committee set up by us, J&J will have to pay over and above Rs 20 lakh base compensation as suggested by the Agarwal committee,” the official said.

Johnson & Johnson Medical India spokesperson said, “To date, we have not received any communication from the DCGI. We are reviewing the report and look forward to discussing it with the government.” The company had earlier said the implant continues to function well for many patients and a voluntary recall doesn’t necessarily mean the product is defective. The regulator has also asked the company to trace more patients who used the implants and continue with their awareness programme by placement of advertisements in national and local newspapers.

“A majority of patients are still untraceable and will not be able to access compensation until they are found,” said Malini Aisola of All India Drug Action Network, a public health group. According to the Agarwal committee report, the company reported 35% revision surgeries in 2014 which is nonetheless felt to be an under-reported figure.